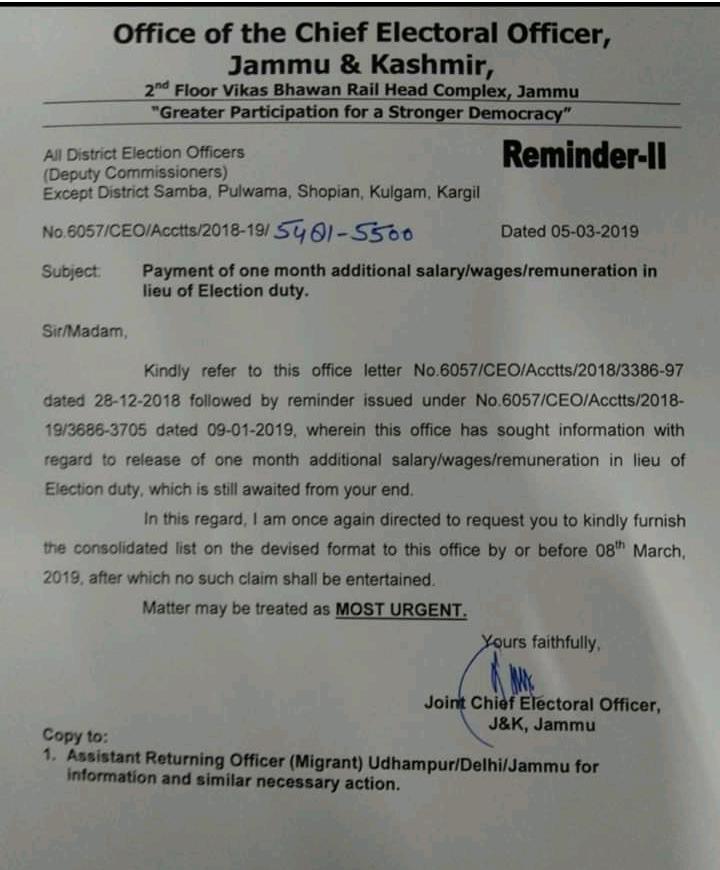 SRINAGAR, Mar 6: The Chief Electoral Office Jammu and Kashmir has taken a serious for not submitting details by government about one month additional salaries to state employees, who attended election duties last year.

Joint Chief Electoral Officer JK has written to district development commissioners, who happen to be election officers to submit the details about one month additional salaries to state employees. The letter reads that district election officer have been directed to kindly furnish the consolidated list on the devised format to this office by or before March 8. “After which no such claim will be entertained,” the letter reads. The government had announced one month additional salaries to employees who attend the election duties.

In December last year, the government ordered the release of one month salary for the employees who were deployed for conduct of Municipal and Panchayat polls this year.

An order issued by the General Administration Department (GAD) had said the sanction is “hereby accorded to the payment of one month additional salary/wages/remuneration as the case may be, in respect of employees as were deployed for conduct of Municipal1 Panchayat Elections, 2018 or both.” The GAD order had said the Drawing and Disbursing Officer (DDO) shall draw one month additional alary/wages/remuneration in respect of an employee, borne on the establishment of his office only after obtaining a certificate to be issued by the following:

“Deputy Commissioner concerned will certify in respect of an employee posted in his/her district that the employee concerned was actually deployed for conduct of Municipal/Panchayat Elections, 2018 or both, under a proper authorization/order and performed such duty without any break,” the order had said.

India uses all ways and means to crush our freedom struggle: JRL