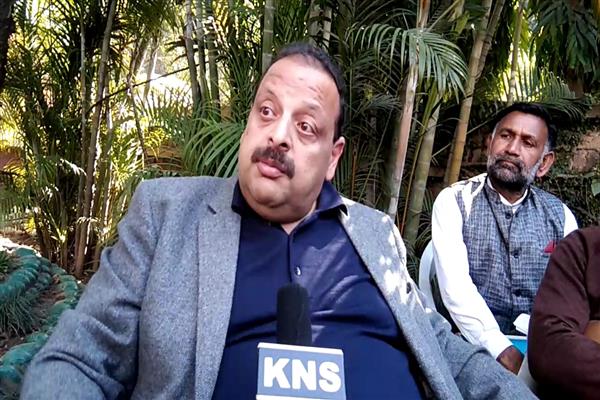 Srinagar, Mar 07 : Deal gun with gun, but don’t take the whole people hostage. Do whatever to bring peace but not at the cost of harassing innocents, dividing society, said National Conference (NC) Provincial president Jammu, Devender Singh Rana.
“The bombs drop in Nowshehra and not in Delhi or elsewhere. The BJP leaders of J&K don’t know even the geography of the state and they have come to decide fate of J&K,” he said in an interview with news service.
To a question about the dialogue between two countries, Rana said he is a small ex-MLA and is not of a stature to decide about international politics. “Let them do whatever they want…but bring peace and let us live in harmony,” he said.
About attempts of polarisation made in Jammu, Rana said people are very sharp and intelligent. “They know everything and all. They will vote them (BJP) out of the state,” he said.
He cautioned the forces trying to fiddle with Article 370 and 35A… “People of Jammu will cry literally after two years, if the article is revoked. They will realise its importance then only. We will never allow anyone to fiddle with our special status. It is our blood,” he said.
“We are also Hindus… but we love Sikhs and Muslims. Which religion teaches to kill people of other religions? I am a hardcore Hindu but I do read Quran, Bible and Guru Grand Sahab. Let the BJP most educated person face me on Gita shalok by shalok. Every religion teaches to respect every other religion,” Rana said.
Adding further, he said, “I am a Bhakt of Mata Vaishnodevi, but I do go to Ajmeer Sharief and Golden temple. Religion is not subservient to politics. No religion teaches hatred. All the extremists be it Hindus, Muslims, Sikhs or Christians, they all are a danger for harmony. We should respect each other’s religious freedom.
Rana said that NC will form the next government with its own majority. “Let the elections are announced. In Jammu it is a fight between NC and BJP and Congress exists nowhere in the region,” he claimed. (KNS)