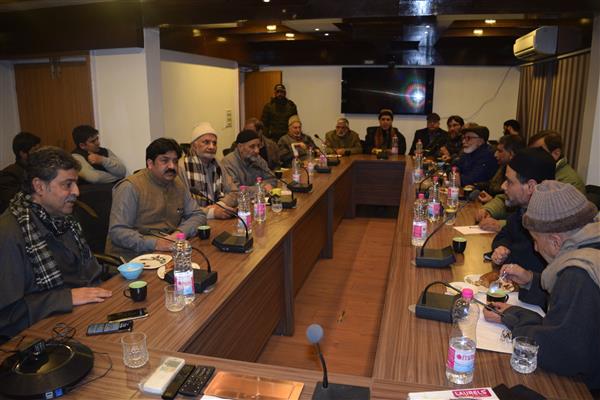 The meeting discussed the present political scenario, in special reference to the summoning of APHC Chairman Mirwaiz Umar Farooq to Delhi by the NIA. Soon after the meeting Prof Abdul Gani Bhat and Bilal Gani Lone addressed a crowded press conference:

Following is the text of the statement read over in the presser:
APHC was launched as far back as June 1993 as the symbol of Political Unity in Kashmir with a view to preserving the idea through thick and thin. Mirwaiz Mohammad Umar Farooq a young boy had the honor to be its first Chairman in recognition of his Politico-Religious background. He represents an Office which is so sacred that interference in any form or at any level with his position is extremely likely to inflict a wound deep into the collective political consciousness of Kashmir.

There is no gainsaying the fact that the conglomerate has passed through thick as well as thin. However what is striking about is, it preserves the beauty of unity of purpose at all costs. We are determined to preserve it in future as well. Let there may no mistake about it that APHC as a forum is democratic in essence and does not, therefore, believe in violence in any form or manifestation let alone so called “terror-funding?”. It may not be out of place to mention here that the Chairman himself is the victim of violence.

As a matter of fact, the forum has all along been actively supporting efforts aimed at building abiding relations between India and Pakistan which is where our position to resolve the dispute through talks needs to be appreciated. We did actually do the talking with the leadership in governments across the sub-continent with a view to working out an acceptable and just solution of dispute on Kashmir. In-fact we were the ones who led the dialogue in 2004 and 2005 despite tremendous backlash and sacrifice. In June 2004 Mirwaiz Saheb’s uncle was killed and his house was bombed, Islamia School burnt yet he did not give up and continued talking to Manmohan Singh Ji. That speaks volumes of his commitment to peaceful resolution. To accuse him of having anything to do with so called “terror funding “is ridiculous, nothing more but political vendetta.

APHC considers in the interests of all that now is the time that we consider bigger issues rather than involve in nerve breaking tactics. Remember, now is different. We will have to rise above and take the lead ourselves. However, APHC appreciates that United States of America, The People’s Republic of China, Kingdom of Saudi-Arabia, Russia and Great-Britten for their efforts towards ensuring that the situation doesn’t go out of hand.
India and Pakistan as nuclear powers can hardly exhibit laxity towards tomorrow. We have to live together and live peacefully to ensure prosperity and development. What constitutes an obstacle will have to be addressed. Talks are the call of times. Let’s take the call and move ahead towards a brighter future and a better region. We can hardly afford to live with tension, acrimony and ill-will.

Mirwaiz Mohammad Umar Farooq the Chairman of APHC who also heads Social and Educational Institutions Auqaf Jamia Masjid, Anjuman Nusratul Islam, Darul Khair all completely accounted for institutions, audited each year. People give donation to these organisations. During floods of 2014 in just 15 days through Mirwaiz Saheb mobilisation, more than 1Cr was raised through Darul Khair.

Mirwaiz our Chairman has made it absolutely clear that he is willing to cooperate with any investigation but what is upsetting is that a hostile environment is being willfully generated to cause harassment.

Overcrowding of prisoners at District Jail Anantnag must be looked into: Tarigami