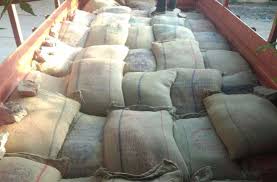 Rajouri, April 12 : Police on Friday seized the rice meant for public distribution in Rajouri district of Jammu and Kashmir. The licenses of two ration dealers involved in the black marketing were also canceled by authorities.

Sources said that a police team, acting on specific information, raided Budhal and seized a vehicle Tata mobile along with 30 bags of rice which belongs to civil supplies and consumer affairs department (CAPD.

30 bags of rice, each weighing 50 kg, were seized on the spot. These were earlier carried in a tractor and later loaded in the Tata Mobile vehicle.

Locals alleged that they have been mostly deprived of getting the rice from CAPD stores and that the storekeepers are hand in glove with private shopkeepers.

“We ask police higher authorities and district administration why FIR has not been yet lodged,” a local resident Waqar Ahmad Lone told.

When contacted, Deputy Commissioner, Rajouri, Mohd Aijaz Asad said he will look into the matter. He also assured action against those found guilty.

The news agency correspondent also shared the photographic and video evidence of smuggling with the DC.

After going through the evidence, the DC said: “I have ordered cancellation of license of two ration dealers involved in the black marketing of rice and the salary of the concerned TSO has been kept withheld.” (GNS

DGP sanctions retirement gift of over rupees 97.50 lakh in favour of 130 Police personnel