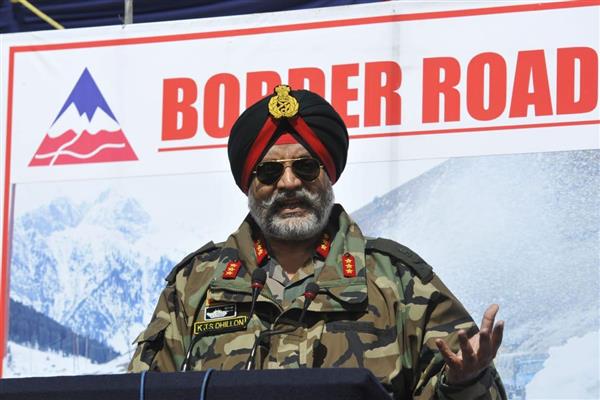 “Drugs will only ruin your life. Stay away from drugs. Study hard, educate others that will lead you to success,” said Dhillon.

Addressing media persons at Zojila pass after throwing open Srinagar-Leh highway for civilian traffic, the GOC, appealed the civil administration of both the divisions of Kashmir and Ladakh to work in coordination synergy to make smooth vehicular movement on the crucial highway.

The GOC also appreciated the work of bulldozer driver Anayatullah who was part of a snow clearance team along the highway.

Dhilon said the Anayatullah is specially abled but he is doing a good job to clear snow along the highway.

“Despite being deaf and dumb, Anayatullah is doing a wonderful job,” Dhilon said.

The 434-km-long Srinagar-Leh highway was reopened for traffic.

It was closed for traffic in December last year following heavy snowfall in Sonamarg, Zojila Pass, Zero Point, and Meenmarg areas of the road.

He flagged off the first convoy of vehicles at Zero Point Zojila.

The function was also attended by officials from civil administration including Chief Engineer Beacon, DC Kargil, SP Kargil, ADC Ganderbal besides the other officials of administration.

The 434 km long Srinagar-Leh highway is the only surface link connecting Ladakh region with the rest of the State.