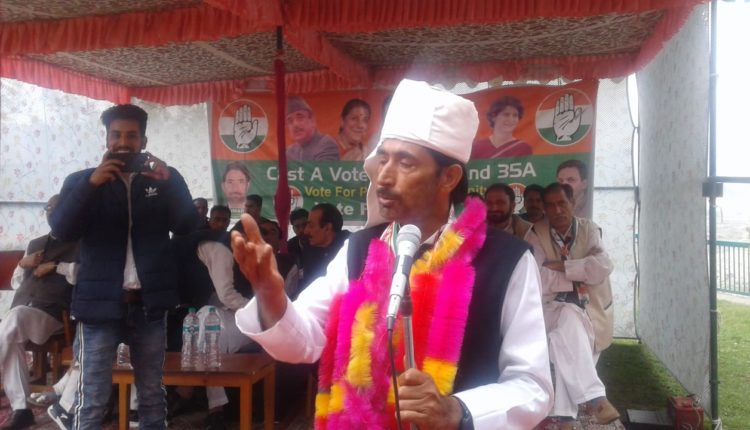 Shopian May 1, 2019. Recollecting the anti-people moves, ban on highway and Educational Institutions, besides mass arrests, the J&K Pradesh Congress Committee (JKPCC) President and Party Candidate for Anantnag Parliamentary Constituency G.A. Mir has described it as deliberate move to impose emergency in Kashmir by BJP RSS.

He also said that Congress Party will review all such moves taken from time to time to ensure that injustice meted out to people by State & Centre Govts comes to an end, besides ensuring that people were not intimated and punished for no fault of theirs.

G.A. Mir was addressing public meetings of Shopian and Wachi constituencies in District Shopian and assured the people that Congress Party will review all such cases to ensure that the confusion created under the garb of ban and mass arrests by Centre & State Govt were cleared to bring the people out of chaos and miseries. Our people have faced the brunt of misrule and mis-governance on the part of PDP and BJP, now the time has come to answer them by ballot, he said.

He said the ban on highways, educational institution and mass arrests in South Kashmir especially in Shopian & Pulwama district was very unfortunate and condemnable on the part of both State & Centre Govt led by BJP, saying that both (BJP RSS) were desperate enough about the poll outcome, for the fact, the Saffron Party has sensed defeat resulting in it started victimizing people of Kashmir on way or the other aiming to divert the attention of the Nation from their failures, which was not going to happen because the people in the entire Country have witnessed darkest era, betrayal and emotional blackmailing under Narinder Modi while having lost trust in BJP.

People need to realize that Congress Party is set to form the Govt at Centre and will address the issues concerning people of Jammu and Kashmir in whatever way, besides putting an end to the harassment, masses arrests, ban on highways and educational institutions, Mir assured.

He said Shopian district has faced tremendous damages due to the PDPs failure on all fronts, this party got a good mandate from south Kashmir, but could not even be able to ensure safety and security of the people rather than PDP has again started misleading people on sensitive issues to get befitted in elections, Mir added and said this is the best opportunity for people to respond to the misleading and opportunist politics of PDP BJP, NC and others, appealing people to ensure victory of Congress Party, but at the sametime, Mir said Congress Party has emerged winning in the Anantnag and Kulgam phases in ongoing Election in South Kashmir, it will also register victory in Shopian & Pulwama District, with a thumping majority.

Mir told the people not to come under false propaganda by PDP & NC, as both the parties are helping BJP under a well-planned strategy and urged them to defeat their designs by ballot. PDP and NC were doing only lip service to people of Shopian & Pulwama for votes, Mir said.

The leaders while addressing the gathering emphasized the people of Shopian and Pulwama to rise to occasion to defeat the politics based on lies and deceit on the part of PDP, NC, BJP and others, which are equally responsible for the prevailing situation in Kashmir Valley.

They appealed the electorates to ensure victory of Gulam Ahmad Mir, from south Kashmir Parliamentary Constituency, with a thumping majority.