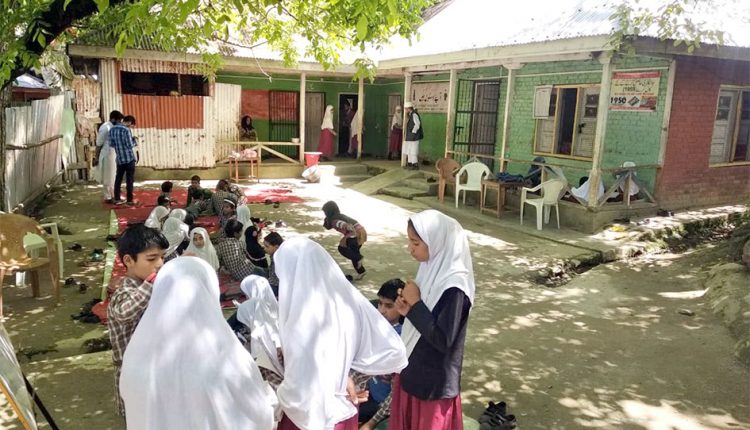 The school has only four rooms – two for teaching eight classes and two for the office and lab. This speaks volumes about the standard of education in government-run schools.

“We are facing accommodation crunch here and are unable to provide proper facilities to the students enrolled here,” a teacher at the school told news agency.

“How can we teach 8 classes in just two rooms that too simultaneously? This has created chaos and confusion in the school,” he added.

Another teacher said it is difficult to teach four classes simultaneously.

“We approached everyone in the administration. We are doing our best to get all the required facilities here so that the students do not suffer,” he said.

Mehaan Majeed, a class 8 student, said the school lacks the latest infrastructure with regard to education.

“We are facing immense hardships due to space crunch and lack of facilities. We don’t even have a proper lighting system and in the absence of electricity, teachers using mobile light to teach us. Several officers visited here but nothing was done,” she said.

The school headmaster Ghulam Nabi said the students’ studies suffer a lot due to lack of infrastructure. “They (students) get disturbed here in one of the rooms where three to four classes are accommodated during rains. Sometimes we give classes in the open,” he said.

The headmaster said despite repeated reminders to higher authorities, no attention was paid towards the school.

In the past, we have arranged several meetings with parents of the students and asked them to provide land for the building of this school but nobody bothered, the headmaster told news agency, adding that one among the parents earlier agreed to provide the land but he too changed his mind.

Students of govt school Reasi forced to do physical labour

Man, Who Grew Up In Orphanage, Gets 46th Rank In J&K Civil Service Exam

Sacking employees on grounds of terror links only to cause more problems: Farooq Abdullah