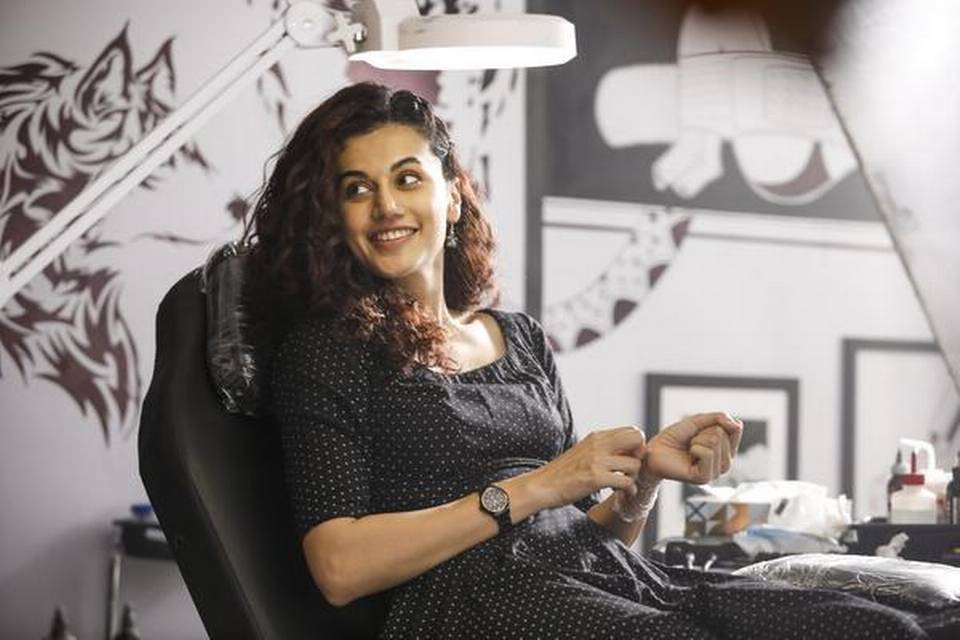 Game Over’s intensely suspenseful opening scene sets the tone for its proceedings. It begins like your typical home invasion thriller, with a masked perpetrator standing outside a teenager’s house, intently monitoring her movements. He breaks into the house to find her taking a shower – Hitchcock’s Psycho comes to mind. Ashwin quickly cuts the scene to show the woman’s suffering; her face covered with a plastic bag and hands tied. It doesn’t end there. Then comes the boldest and well-thought-out shot – of a headless body being burnt. It doesn’t end there either. He treats her head like a football, pocketing it at a nearby goalpost. The stretch is graphic and is nothing we have seen in cinema. It’s alluring details make it one of the rare and fascinating opening scenes…

A game designer by profession, Swapna (Taapsee Pannu in a remarkable performance with great resistance) lives in a cocoon, alienated from human contact. She hasn’t visited her parents in ages and lives with her housemaid Kala (Vinodhini Vaidhyanathan), who, thankfully, brings lightness to an otherwise dark (no pun intended) subject. Swapna has premonitions about New Year’s Eve and she’s occupied by those troubled thoughts. We learn about this when she’s traumatised by the presence of darkness. She is nyctophobic and seeks help from a psychologist, who puts her condition in medical terms: Anniversary reaction – a result of a post-traumatic event. Which means that every day closer to the New Year, her condition worsens. I loved Ashwin’s idea of communicating this through a minimalist poster. Swapna and Kala are outside the clinic and the background has a series of images, showing different phases of lunar eclipse. Perhaps to explain Swapna’s emotional state?

One way to look at Game Over is from the perspective of a gamer. It’s largely set in a fictional world, where the events that unfold in the narrative are actual plots points of a video game. In fact, a poster says, “What if life is a video game and déjà vu are just check points?” Is she hallucinating? We don’t know this for sure, except but the fact that Swapna is a compulsive gamer, and often finds her obsessing over Pac-Man. It’s an interesting choice of a game, for Pac-Man is a superb allegory on her. Structured like a game, she’s enclosed in a maze called life, with three Gothic-like figures after her head. There’s a constant hint about Swapna’s past that seeps into the narrative more than once. It’s indicative of a harrowing incident that stripped Swapna of her sanity. Her past is served through voice-overs and Swapna says, “I wish I could go back and mend things. However, life doesn’t work that way.”

But what if there was an option to restart, like in the gaming world? Would Swapna fight back? Game Over is essentially an all-women world, where men hardly exists. Writers Ashwin Saravanan and Kavvya Ramkumar avoid stereotypes and make a powerful statement about fighting your inner demons. The closest movie I can think of in this genre is Darren Aronofsky’s Mother!

Game Over starts off like a murder mystery story, but midway into the movie; it comes across as a psychological horror. Of course, genre is irrelevant for a movie, whose imaginative ideas are broader and enormous. Take this scene for instance. When we are introduced to Swapna’s lifestyle, there’s a split-second shot of a swing outside her house. You may feel it’s oddly placed, but the shot has a mind-blowing relevance in the second half. And it’s chilling and terrifying (Ron Ethan Yohann’s mystic score is even more haunting) when you think about it. The film isn’t free from narrative issues. I wasn’t too convinced by the tattoo angle. Although you could argue that it is a permanent stain/mark left on Swapna. Anything more, would spoil the fun for you.

I really wished Ashwin had given Swapna a closure. But in life, we don’t have a restart button, do we?

Don’t hate anyone: Arjun to woman who accused him of disliking Sridevi

Kher on Zaira’s bollywood exit: “Not her own decision”