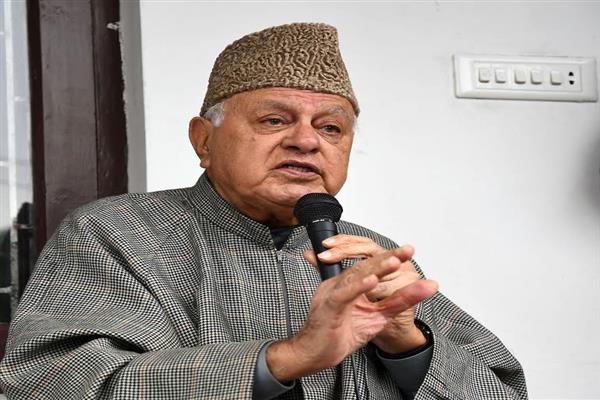 Srinagar, June 15, : Party president who was the chief guest on the occasion visited 51 stalls being erected by booksellers from across the country. Books on various subjects from all across the country have been put on display for the readers, the spokesman said.

Party president in his address said that there was a kind of communal mentality that is spreading malicious propaganda about the Urdu language. “Urdu has never belonged to a particular sect or faith. Urdu is a representative language of Ganga-Jammuni Tahzeeb of India; the language has been watered by both Hindus and Muslims. The existence of Urdu language owes a lot to Munshi Prem Chand and others. The scathing rise of communalism in the country is taking a toll on the language, today we see homogeneity being forced on our country that has always been known for its diversity. This I believe is one of the diminishing factors of Urdu from our day to day lives,” adding “However I take this opportunity to welcome the initiative of NCPUL for coming up with such fairs annually. Events like these provide a window of opportunity for those who have a penchant for Urdu literature. Such festivals and fairs will surely acquaint the new generation about the contemporary happening in the field of Urdu literature.”

Party president on the occasion underscored the need giving equal respect to local languages. “Learning to speak in one’s mother language is very essential for a child’s overall development. Being fluent in other languages helps a child in many ways. However, using local languages as a medium of teaching helps a lot in the cognitive development of a child. Kashmiri languages are known for its richness, particularly for its poetry, maxims and other literary aspects; the need of the hour is to get our new generation acquainted with it. Similarly, the speakers of other languages take equal pride in speaking their languages. It is thus imperative for a government to provide patronage to all the languages of the state,” he said, “the contemporary youth should strive towards getting an education. It is the education that holds the panacea for all the problems.”

Inhuman treatment meted out to Kashmiri political prisoners is a point of concern: National Front