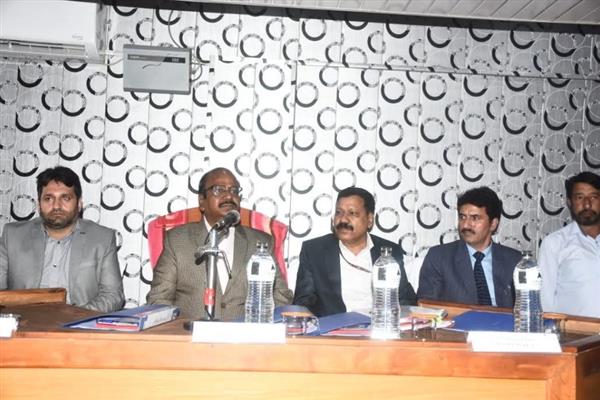 Deputy Mayor Shiekh Imran in his welcome address said that Saffai Karamcharis are not only the strength but the back bone of the Corporarion and hence their needs, grievances, genuine demands, equipments they require has to be prioritized.

While welcoming Zala he said it is a big day particularly for Safai Karamcharis that Chairman had all the way come to interact, know the issues Safai Karamcharis face and also to see whether their basic rights and other genuine demands are being taken care of by those who are at the helm of affairs.

Valji Bhai Zala while speaking on the occasion emphasized that cleanliness has a greater significance in all the religions, our Safai Karamcharis who perform their duties from dawn to dusk with utmost dedication are the real heroes to provide clean and safe environment to the people.

But it is unfortunate that if their health, other basic rights and their genuine demands are not to be taken care of timely.

Through such events we want to empower and encourage this Safai community and know their present status in terms of their working mechanism, health conditions and the conditions of their houses/colonies they are living in.

Commissioner SMC Khurshid Ahmed Sanai in his presentation gave an overview of SMC and its various functioning.

He also threw light on various topics including mechanism of waste segregation taking place in Srinagar city and its disposal at dumping site Achan.

The workshop was followed by meeting with the representatives of Safai Karamcharis, Employees, welfare, unions/Associations, Municipal councils/committees of other districts.

Chairman Safai Karamcharis workers Union, Ghulam Mohammad Solina while expressing his gratitude on behalf of Safai Karamcharis to the guests also highlighted various issues of sanitary workers and expected that their genuine grievances will have timely redressal.

Long question answer sessions were held at the end of the event in which Chairman National Commission for Safai Karamcharis Zala along with his team presented questioner to the concerned at the helm of affairs.

The questions mainly remained focused at Safai Karamcharis that included questions like total number of Safai Karamcharis working in the Municipal Corporation. Their break-up in terms of status of their employment i.e whether on regular/daily wage basis, on temporary/part time basis, or on contract basis.

Similarly questions like promotional avenues for the Safai Karamcharis, providing of proper equipments including safety gadgets like gumboots, gloves, facemasks etc to carry out their jobs, whether the health checkups of Safai Karamcharis is conducted on regular basis and the steps being taken to implement Swachh Bharat Abiyan and so on were posed during the session.