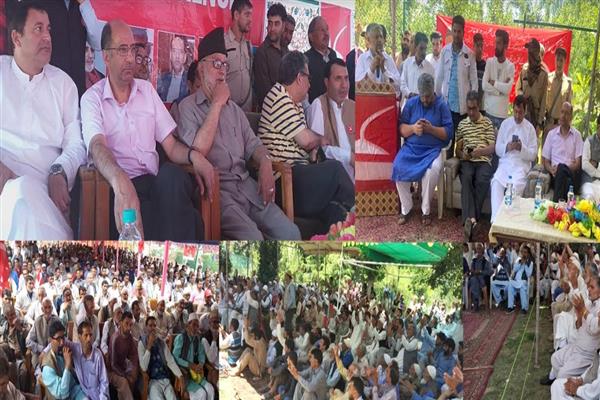 Srinagar, Jun 26 : Jammu and Kashmir National Conference on Thursday said that it will reverse the trend of injustice being meted out to youth, saying the party among other key ideas will majorly focus on issues of job creation and skill development.

Party general secretary Haji Ali Muhammad Sagar while addressing a series of worker’s conventions at Pattan and Kunzar said tackling unemployment is the biggest challenge before the party. “The severe unemployment is a ticking time bomb that warrants immediate attention of the forthcoming civilian government. During the successive governments of the National Conference, providing safe spaces to youth has been the core of our governance policy. The Dr Farooq Abdullah led government had provided a number of jobs to the youth in his stint as chief minister. His government had adjusted 75000 youth in police department only. Not just that the then NC led government had provided employment to youth in other departments as well; it had employed 35000 teachers, and 55000 Aganwari worker. On the similar lines lacks of youth were adjusted through various skill development and employment programmes in the Omar Abdullah led government. Schemes like SKEWPY and seed capital fund had revolutionized the creation of jobs for youth. Besides that lakhs of youth were given jobs through various recruiting agencies in the state.”

He further added, “But what good was achieved by the former NC Government was put into a chasm by BJP-PDP government. Never has the state witnessed such nepotism, cronyism, and corruption as was rife in the former PDP-BJP government. The fateful coalition didn’t leave any stone unturned to push the educated youth to wall by robbing their merit. The controversies associated with various recruiting agencies and the slack functioning of the recruiting agencies has also been a hallmark of the former PDP-BJP government.”

While referring to the aversion that the BJP has for minorities, particularly Muslims, Sagar said, “The special status of our state has traditionally been a scorn in the eyes of such forces as are inimical to our identity. Today our state is under the onslaught of machinations from all quarters, the forces as are inimical to the interests of our state are contriving to disintegrate our state. However people of our state are well aware of the malicious agenda of such forces, and their cronies in the state.”

Addressing the workers, party provincial president said Nasir Aslam Wani said, “In the just concluded LS elections, people considerately voted for National Conference. People are well aware of our chequred history based on sacrifice. The immense hardships, penitentiary suffered by Sher e Kashmir for the identity and integrity of the state is still inscribed in the memories of people of the state. Our vision is explicit; it is to protect the identity and territorial integrity of the state. Besides that the main challenge ahead of us would be to put the state back on the track of development and prosperity.”

Nasir said that Art 370, Art 35-A are the articles of faith for the party. “Until the flag of NC flutters in the state no one would be able to fiddle with our priced identity and identity,” he said adding, “Keeping in view the challenges the state is facing, the functionaries and the workers of the party should strictly abide by the cherished ideals of Sher e Kashmir. The slogan Sher e Kashmir ka kya Irshad , Hindu Muslim Sikh Itihad forms the core of our ideology, the need of the hour is to visualize the slogan practically.”

Among others party’s Chief spokesperson Aga Syed Ruhullah Mehdi, Javaid Dar, Reyaz Bedar, Farooq Shah, Showkat Mir also addressed the workers and impressed upon them to take the programme of the party to every household. (KNS)

Three killed in road accident in UP