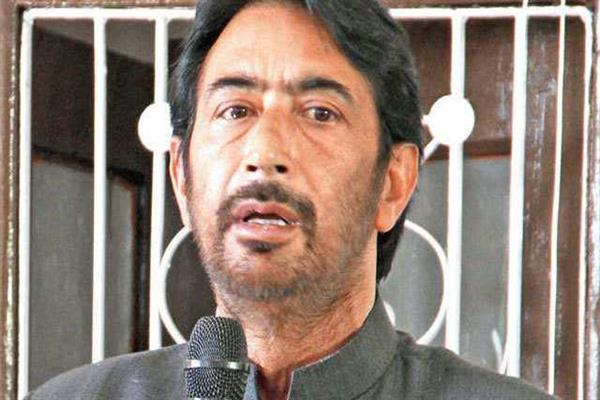 Dooru, Jul 29 : Asserting that Jammu and Kashmir was the victim of wrong policies of Centre and previous State Government of PDP-BJP which came into the existence after betraying people for votes, the J&K Pradesh Congress Committee (JKPCC) President G A Mir lashed out at Centre Government over being insensitive towards the agony of the people.

Mir was addressing public meetings at various places in Shahabad Balla in Dooru Veerinag today, where he appealed the people to rise to the occasion to strengthen the Congress party for their better future.

JKPCC president said that people were feeling that Centre wants to continue to rule the State through Raj Bhawan and take some important policy decisions in absence of the State Legislature, urging upon the center Government to clear the doubts, brewing in the hearts and minds of people.

“On one hand Prime Minister Narendra Modi Government was claiming that it would address the developmental issues confronting state, on war footing basis, but on the other hand its approach towards the State was very unfortunate, people were being denied their right to elect their representatives by way of elections, which is not only unfortunate but very serious rather anguishing for the people of JK,” he said.

Mir urged the Centre Government to restore the confidence of the people and ensure that elections to State Legislative Assembly were held in order to give the people their own Government, which could listen and address their issues without running from pillar to post.

Mir added that Congress party initiated incredible process of development in JK, many projects were completed and many were in the pipeline, but the previous PDP-BJP Coalition has undone every achievement of the Congress party, the fact of the matter, was that the people were pushed to wall due to the contradiction and unfriendly approach of the then State Government, besides that the Centre Govt has added miseries to people by adopting callous attitude.

Mir also said that Congress party will make concerted efforts to make the Centre and Governor Administration accountable and answerable to people to ensure resolution of the problems confronting state and people.

Referring to the local problems of the people in Kapran Dooru and other far flung areas in JK, G.A. Mir said people in Shahabad Balla Panchayat Halqas were being forced to pay 350 as electric fee some have been asked to pay Rs. 535, which is unaffordable and beyond their financial limits, earlier these poor people having been paying Rs. 108 per month as electric fees, now they have to pay Rs. 350 and 535 against using on bulb in their homes, which will be distressing for them.

He also urged upon the Government to Start SRTC bus service from Kapran Dooru to Anantnag to ensure hassle-free movement of common and poor people.

PCC president also demanded road connectivity in Kapran Veerinag and said the Kapran Veerinag road project which could have ensured great respite to local population, has been left hallway for unknown reasons and demanded that the project must be complete in the larger interest of people.

Troop movement in Kashmir not connected to any pending announcement: Advisor Kumar

All Hospitals, Anganwadi Centres, Schools across UT to be connected with water supply by 15th August: LG

Health Ministry says, ‘Authorities gears up for roll out of COVID19 vaccine across the country’

Don’t know what has been added, subtracted in the proposal: Masoodi