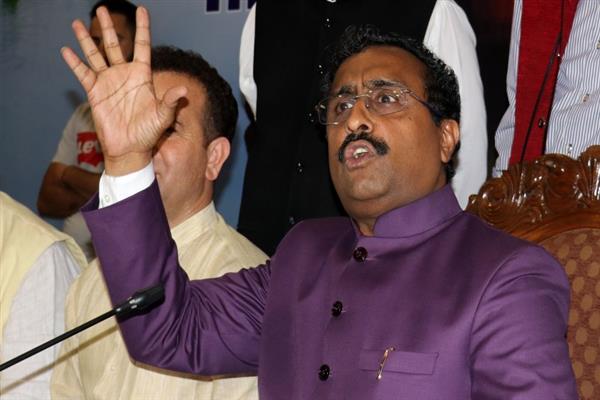 Srinagar, Jul 31 : Playing smart on the BJP’s stand on abrogation of Article 35 A, BJP General Secretary Ram Madhav said on Wednesday that the Prime Narendra Modi government would take necessary steps for the benefit of the state at an appropriate time. He was quick to add that the Centre’s drive against corruption in J&K has left political parties especially National Conference and PDP frustration as they are now creating a war hysteria in the State at a time when elections are going to be held later this year.

According to news agency while addressing press conference here, the BJP General Secretary said that BJP’s stand on it (repeal of Article 35A of the Constitution) is very clear but it is not the party which is going to decide (on the matter). The decision will be taken by the prime minister and his government, but I can assure you that whatever decision they will take, will be in the interest of the state,” Madhav told reporters here, according to the news agency.

He said the state’s political parties were creating an atmosphere of fear in Kashmir by linking the movement of central armed paramilitary forces with other issues to save their political turf.

“Leaders of local regional parties are creating fear psychosis for their political interests. Moving forces in and out of Kashmir as per the requirement of the security grid is an ongoing process. Extra forces are brought in for Amarnath Yatra or elections like there is going to be block-level elections for panchayat. But linking the movement of forces with other issues is being done for personal interests,” he said.

He said that BJP was going to contest on all 87 seats in J&K and at the same time, “we want forces and youth to emerge as a front so that NC and PDP are wiped out from the political turf of the State.” “We want to ensure that State gets rid from the dynasty rule, sooner the better,” he said.

He also said that the counter insurgency operations were successful in the state as the militancy has been contained to a large extent and peaceful atmosphere is prevailing in the State. (KNS)

‘Bollywood in Kmr’, Govt jovial, says ‘Will provide platform to local artists to showcase their talent’