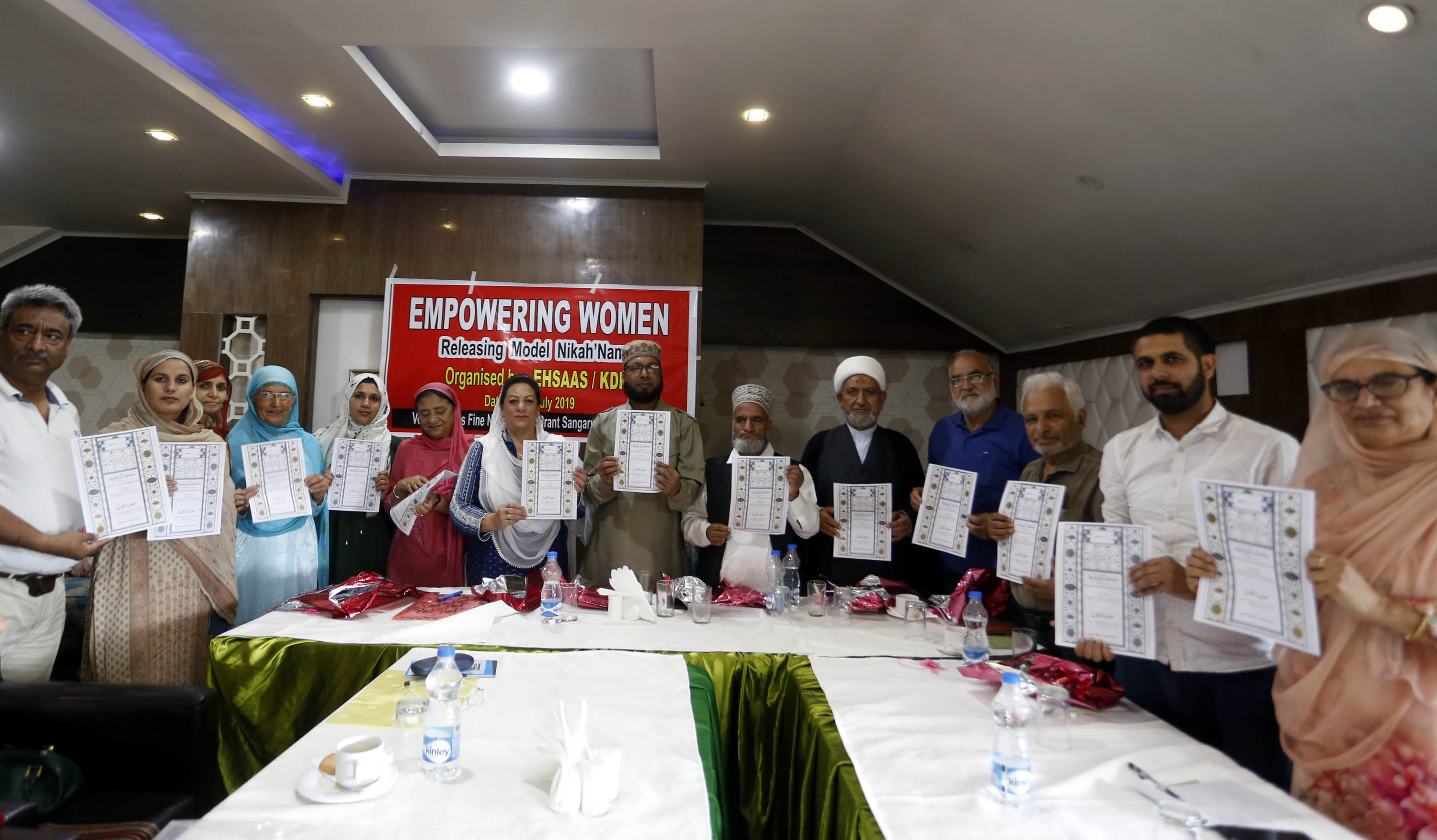 Srinagar, July 31: Ehsaas, a group working on empowerment of women Wednesday released a Model Nikahnama, aimed at including broader details that would empower, strengthen or define the position of women and elaborate on their rights.
The Model Nikahnama was released at a local hotel in Srinagar in presence of Ulema from different sects, members of civil society, including academicians, former judges and women rights activists.
Speaking on the occasion, Ezabir Ali, Founder/Secretary Ehsaas gave an overview and background of coming up with the Model Nikahname.
She said that this is in continuation of the work done earlier by the group, where Ulema representing all sects and various religious scholars have been involved to address the issues faced by women in our society.
“While engaging on the subject related to half widows, it was observed that after the disappearance of husbands, most of the half widows along with their children are denied property rights and  turned away from their homes. The marriage contract or Nikahnama of half widows as well as, of  most women in Kashmir and elsewhere does not include broader details that would empower, strengthen or define the position of women, elaborating on their rights, it generally mentions the amount of Mehr (dower) given to the bride at the time of marriage, as per financial strength of the family,” she said.
Ezabir said as such we felt there was a big gap that needed attention. “Various efforts and exercise in the background helped to explore the different kinds of Nikahnama existing in the society, none of them was complete – each had a serious gap. Many Ulema and religious scholars have contributed to this process,” she said.
The Ulema and religious scholars who contributed to the process, include Moulana Shams-ur-Rehman, Moulana Showkat Hussain Keng, Moulana Sheikh Ghulam Rasool Noori, Moulana Hakeem Sajad, Moulana Shabir Falahi, Moulana Ghulam Rasool Hami and others.
People from civil society who contributed in the process, included former judge Goussun Nissa, renowned academicians like Prof Nusrat Andrabi, Prof A G Madhosh, Prof Hameed Naseem Rafiabadi, former chairman of J&KBOSE, Bashir Ahmad Dar, former president of KCCI Shakeel Qalandar, Shahid Shabir and many others.
On the release of the Model Nikahnama, Moulana Shams-ur-Rehman said they have discussed it with Mirwaiz Umar Farooq and he is very keen to look into it. “We had several deliberations over the model Nikahnama and if there are any suggestions or modifications, they can be later included in it. There is a positive response about this step and all the religious groups irrespective of the sects will take it forward. We are getting several issues related to marriage and it is very good we took all best practices in one model which can be further improved in future, if needed,” he said.
However, he said, there is a need that it should not remain confined to paper only but should be taken to public domain for further discussions, feedback and implementation. “We are in contact with other religious leaders across Kashmir regarding this issue,” Moulana Rehman said.
Moulana Showkat Hussain Keng said they had several meetings over the period of time where women representatives gave their valuable suggestions which have been included in the Model Nikahnama. “We are not saying this is the end but it is the beginning of working towards creating awareness about the rights of women in Islam, be it property or marriage,” he said.
Speaking on the occasion, Moulana Sheikh Ghulam Rasool Noori said our problem is that we don’t follow Quran. “Solution of all our problems lie there. It is responsibility of ulema to spread the awareness,” he said and congratulated the Ehsaas group on framing the Model Nikahnama.
“I hope it would be received well in public,” he added.
It is pertinent to mention here that Ehsaas has been working on women issues in the State for the last more than 10-years. Ehsaas has held several meetings with ulema, religious scholars and civil society members to finalise the model nikahnama. Earlier, Ehsaas had a breakthrough and a consensus statement was reached in 2014 among Ulema on “Idaat” (period of wait) of half widows’ remarriage issue and property rights.
previous post