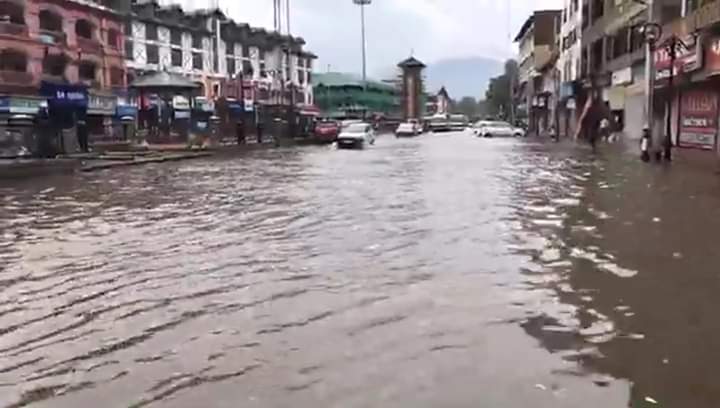 Srinagar, Aug 01 : As the Srinagar witnessed inundation yet again due to the fresh rainfall wee hours of Thursday, the trade bodies here lashed out at the concerned authorities for ‘failing’ to repair the drainage system.

The trade bodies including Regal Chowk Traders Association, Kashmir Chamber of Commerce and Industry (KCC&I) and others said that the rainfall for few hours is frequently resulting in inundation of Srinagar city due to which people especially pedestrians suffer.

According to news agency, they said that the concerned authorities must take steps to put an end to such sufferings of people so that the local populace here could heave a sigh of relief.

KCC&I while addressing a presser here at Chamber office at Residency Road, said that it is unfortunate the drainage system in Srinagar is not being renovated properly due to which the few hours of rainfall is leading to the inundation of roads.

“It is for the second time in recent past that the Srinagar city including the commercial hub Lal chowk got submerged due to the rainfall. The locals had to face tremendous hardships due to the inundation of roads,” the trade body said.

Besides criticizing Srinagar Municipal Corporation for failing to repair drainage system, they also hailed the administration for dewatering the roads immediately.

Meanwhile, Deputy Commissioner (DC) Srinagar Dr. Shahid Iqbal Choudhary said that water logging is a serious issue especially in Srinagar City. “The efforts are on to ensure proper drainage system but the maximum effort is being made on the removal of garbage from the drainage, which is being found in huge quantity in the drainage, which is the main reason behind the water logging,” he said.

He added that the inundated areas were dewatered as men and machinery was pressed into the services. He said that public should also play their role by not dumping the garbage in drainages.

DC Srinagar further stated that it will take some six to eight months more to ensure the proper drainage system. (KNS)

Sewage coming out from quarantine centre thrown on road at Watergam

Falling education standards in govt. schools and Board actions push the future of students into darkness

Employs of Wool Dev Board face pay disparity, await for service rule benefits like other Deptts