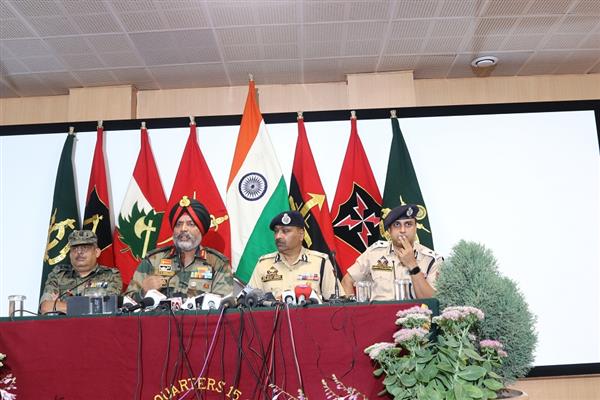 Srinagar, Aug 2 : The top security officials Friday said that the annual Amarnath pilgrimage was under serious threat of possible strikes by militants even as a US made M-24 sniper rifle and a Pakistan made land mine was recovered enroute cave shrine of Amarnath during extensive searches.

According to news  agency addressing a joint press conference at the Badamibagh Cantonment here, the GoC 15 corps Lt General KJS Dhillon, DGP Dilbagh Singh, IGP Kashmir S P Pani and ADG CRPF Zulfikar Hassan said that the US made sniper was recovered along with a Pakistani land mine during the extensive searches conducted by the security forces enroute cave shrine. The GoC, however, said that he won’t disclose the exact location where from the sniper and the land mine was recovered as it was a security matter as searches in the area were still on.

“There are concrete inputs and confirm leads that militants are planning a big strike on the Amarnath Yatra in Kashmir. We have taken elaborate measures to thwart all attacks. Last three days were hectic for us and we conducted heavy searches along the both routes leading to the cave shrine. During searches we recovered US made sniper rifle, huge cache of arms and ammunition and a land mine that as a Pakistani manufacturing company number on it,” General Dhilon said, adding that “This has provide that Pakistan is sponsoring militancy in Kashmir and that we will not tolerate it in any case.”

He said that of late after massive successes by the forces achieved on the anti-militancy front, especially in eliminating the top leadership of Jaish-e-Muhammad, Lashkar-e-Toiba and other outfits including Hizb and Ansaar Gazwatul Hind, militants changed their strategy and are using IEDs to target forces.

“There have been a series of attempts after Lethpora attack that includes Banihal, Arihal, Pulwama, another one at Arihal again and the latest one at Shopian,” he said. “Militants are using modern techniques to blow up the IED so are the security forces using latest techniques to thwart IED attacks.”

About the infiltration, the GoC said that of late, there has been rise in the infiltration attempts from across as launch pads are full with the militants, who are ready to sneak in. “Infiltration bids are taking place from almost everywhere in Jammu and Kashmir even from the Pathankote area as well. We are thwarting all bids in a very professional manner,” he said. The GoC also said that after March this year, July 30 saw the worst even ceasefire violation by Pakistan in Tanghdar and Gurez sectors that was retaliated by the troops after which there is a calm. “If Pakistan resorts to ceasefire violation again, there will be a very hard response from our side,” he said.

Replying to a query IGP Kashmir said that at least ten bids to target security forces with the IEDs was made by the militants in the recent past. “Five modules were bused and several persons have been arrested for their involvement in IED attacks. Top leadership of Jaish that was involved in planted IEDs that include Usman, Kamran, Muna Lahori and Fayaz Panzoo have been killed. But the IED threat still persists and is being dealt with effectively,” he said. (KNS)

Be people friendly but tough against the criminals : DGP