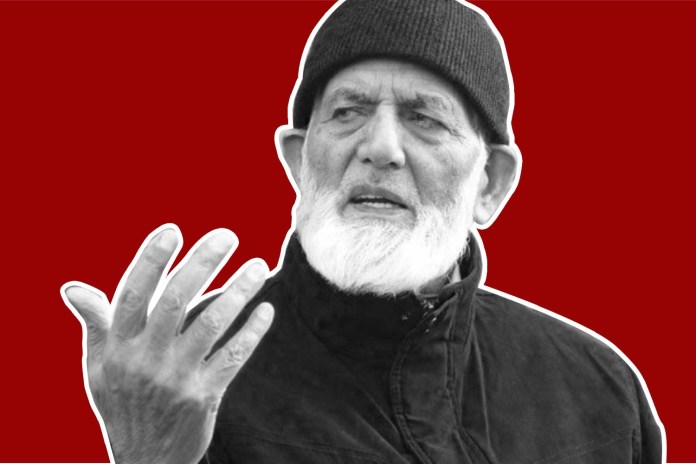 Hurriyat Conference (G) Majlish Shoora (Executive Council) held an important meeting on Saturday which was presided over by its chairman, Syed Ali Geelani at Hyderpora Srinagar.

A statement of Hurriyat (G) said in his presidential address, Geelani said that chaotic and confusing situation has panicked every individual.

“Increasing the forces deployment, rumors of tempering special provisions of state, suspension of Yatra, evacuating tourists, students and yatries has created a war like situation. Pro-India politicians are the real culprits of hollowing these provisions just to grab luxurious for themselves and their progeny,” he alleged.

The Hurriyat (G) chairman said that the land grants bill was passed by them and their leaders even openly said that article 370 is not a divine saying which cannot be altered. “State land was allotted to Shrine Board and separate colonies to create state within the state was proposed by these collaborators, now they shed crocodile tears to protect them. Those threatening Delhi rulers from here bow their heads just with an embezzlement enquiry. Despite their decade old appeasement and obeying their orders without applying their own minds, but even after surrendering every bit of their conscience and even faith, they are not trusted rather humiliated and thrown away. History stands testimony that every collaborator big or mighty meets same fate,” Geelani said

He said “for resistance camp these provisions were never existing as they have been booked in those cases which have no jurisdiction here. They were forced to be lodged in jails outside state long ago.”

“Athough these provisions were existing on papers only—still they have a historical relevance and are globally accepted as the legacy of dispute and Indian fascist rulers want to do with these on paper hurdles to enforce demographic changes as they did in 1947 in Jammu interacting half a million Muslims and cautioned Delhi rulers that they must not forget that this is not 1947 and any such mischief will be resisted to the maximum,” Geelani warned.h

“Those parroting the Jammu and Kashmir to be their ‘integral part”, have to keep more than one million armed forces on high alert for 24 hours. They have to spent a hefty share of their budget on defense and threaten the life of their innocent army every day—but despite such massive human and material investment, India failed to win over the hearts and minds of Kashmiries for 72 long years and one dare to voice our sentiments in spite of roaring guns,” he said.

“We are constrained as thousands of our leaders and workers are languishing in jails—but those outside in this bigger jail, have a responsibility to rise to the accession and play their role rather than acting a mute spectator,” he said and added that recent geopolitical scenario and positive gestures by world leaders have once again negated Indian narrative of internal or bilaterality of Kashmir issue.

“It has again crossed over these false boundaries which has unnerved Indian establishment and they have resorted to the hysterical and unparalleled response.”

Commenting upon the pathetic and unjustified media response, Hurriyat chairman said that they do whatever is fed to them.

Five attempts by Pakistan’s BAT on border posts, India hits back with Bofors