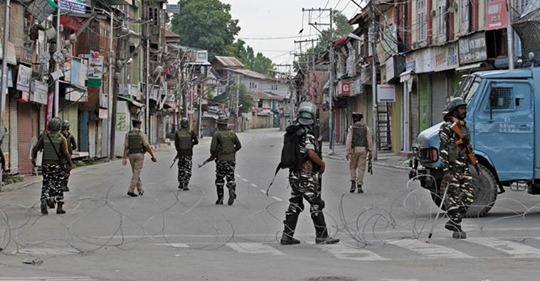 The Jammu and Kashmir government eased restrictions in parts of the Valley Saturday and began restoring landline services in some areas.

Kashmir has been under an unprecedented communication blackout since August 5, the day the Centre moved to end the special status of the state.

“Since morning, relaxations have been provided in 35 police stations across the breadth and length of the Valley,” J&K government spokesman Rohit Kansal said at the daily briefing at the Media Facilitation Centre in Srinagar on Saturday afternoon.

There are 105 police stations in the Kashmir Valley — 34 in North Kashmir, 32 in South Kashmir, and 39 in Central Kashmir.

“While the situation is being closely watched, there has been no report of untoward incident so far. Public transport has also started plying and we are getting encouraging reports of normal movement from lot of rural areas,” Kansal told the press conference.

However, as the restrictions were relaxed, protests erupted in several parts of the Valley. Protesters threw stones at several places, forcing the re-imposition of restrictions. At least eight protesters were injured in action by police and paramilitary forces.

In North Kashmir’s Sopore, large number of youths took to the streets to protest against the abrogation of Article 370. They threw stones at security forces, who responded with heavy tear-smoke shelling. Restrictions were re-imposed in parts of Sopore town.

Protests also erupted at Singhpora, on the Srinagar-Baramulla national highway. A large contingent of police and paramilitary forces was re-deployed in the area, and restrictions imposed. Paramilitary forces fired dozens of tear smoke shells to disperse the protesters.

Protests were also reported from other parts of the Valley, such as Chadoora in Central Kashmir.

“We have reports of seven to eight incidents of stone pelting,” Kansal said in the evening press briefing. “We have reports that eight people have been injured.” He had no information about the nature of the injuries, Kansal said.

Business establishments, government and private offices, and schools and colleges remained closed, and public transport largely remained off the roads. The few private vehicles, however, plied in parts of the Valley.

On Saturday, the government also started to ease the communications blackout, starting with restoring landline connections in some parts of the Valley.
“On communication, as we speak, 17 telephonic exchanges out of 96 total exchanges in Kashmir Valley are functional, enabling functionality of landline phones,” Kansal said. “It is our endeavour and attempt that by today evening, at least half of the total exchanges are made functional and carry forward this process.

“We hope by tomorrow evening, barring a very few vulnerable areas or exchanges, all the telephone exchanges shall be made functional,” he said. Landlines and cell phones are already functional in the Jammu region, the spokesman said.

In the evening, Kansal said that about 23,000 landline connections, roughly 50 per cent of the total in the Valley, would be restored by Saturday evening. However, landlines were not restored in the city centre of Lal Chowk, where most media organisations have their offices.

In Sopore, people were asked to get clearance from the police for their landline connections to be restored.

In the areas like Jawahar Nagar in Srinagar, where landline connections have been restored, people said services appeared to be restricted.

“We are not able to call every number,” said a resident of Jawahar Nagar. “We have unhindered access to telephone numbers outside the Valley, but as of now, we are able to make calls only to a few numbers inside the Valley.”

Kansal said the government was looking forward to opening schools from Monday. However, to prevent protests by older children, schools would be opened only until Class 5.

“We are looking forward to opening of schools beginning with primary schools, and as we mentioned yesterday, there will be full functionality of government offices beginning Monday,” the spokesperson said.

Responding to a question on the release of political detainees, Kansal said: “I reiterate these are directions which are to be taken by local authorities based on their assessment of the law and order situation.”

Talks with Pakistan only on PoK: Rajnath Singh

Minor boy’s body fished out from Jhelum in Uri