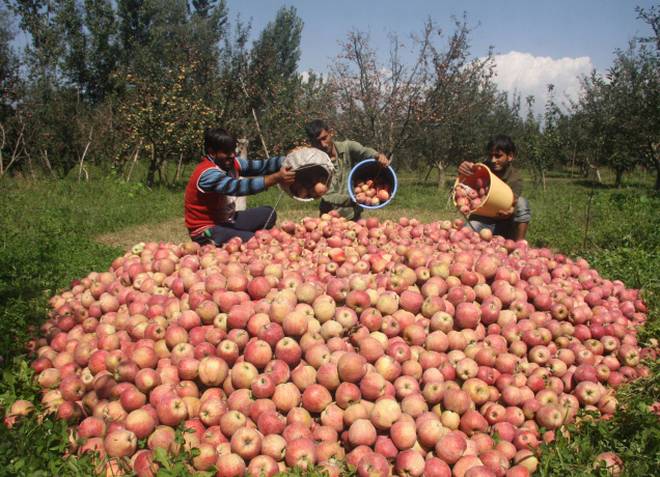 Shopian, Sep 17 : What could be termed as a major relief to the farmers of restive Shopian, Kulgam and Pulwama districts of south Kashmir, the apple growers have started stocking empty apple boxes at their orchards from last few days.

According to wire service—the development came after one- and- a half month of complete silence when the inhabitants of this ‘fruit bowl’ has decided not to harvest apple crop then sell it to India’s mainland Fruit Mandis in the wake of revocation of special status to Jammu and Kashmir on August 5.

Known as ‘Apple bowl of Kashmir’, growers here have not plucked a single variety of apples in the area, as the biggest fruit Mandi remained shut this season so far. There is complete silence in the entire area and no one knows what was happening with the crop.

Apple varieties known as Italy- introduced in recent years, Kinnor and Kullu Delicious are ripe and ready to harvest, but farmers have not plucked a single apple till date.

This cash crop fetches annually more than Rs 6, 500 crores for Shopian district alone making the farmers of this “sensitive” district most prosperous in the Valley. “Last year the Shopian Fruit Mandi would do a business of around Rs 650 Crorey on daily basis, but not a single rupee business was done this season,” an apple commission agent told.

The growers didn’t pluck apple, fruit Mandi remained shut this season after some posters appeared in the area asking growers and buyers not to do any kind of trade this season.

Had the fruit Mandi in Shopian being run in this peak season, five lakh fruit boxes would have been exported to different markets in Indian states on daily basis. According to growers, as per rough estimates, 18 lakh fruit laden boxes would have been sold in five different fruit Mandis of south Kashmir had there been no uncertainty or clampdown. (KNO)