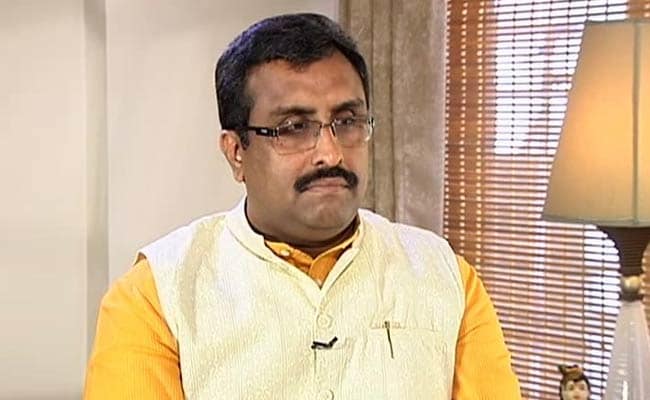 Senior BJP leader Ram Madhav on Sunday said that some detained politicians here are sending messages to people to pick up guns and give sacrifices. Mahdav was speaking to a gathering of BJP supporters at Tagore Hall in Srinagar on Sunday.

This was the first time any BJP leader addressed a gathering in Kashmir after August 5 when Article 370 was abrogated.

“I want to tell people to tell these politicians to first give sacrifices themselves and then ask others,” he said.

“Such politics cannot run. New administration will run on ‘sab ka saath, sab ka vikas’. This is the motto of the Modi government,” Madhav further said.

He said if detaining 200-300 people helps maintain peace, then let them stay there for a little longer.

“We will march on the path of development and peace,” he said. “For that if we have to keep 200-300 people in detention, we will,” Madhav added.

He said that the incidents of violence in Kashmir are negligible in the last few months.

He said now there are only two paths for J&K – peace and development. “Whosoever becomes a hurdle, he will be dealt with strongly,” he said. “There are many jails for such people in India.”

He said the revocation of Article 370 was first initiated by the Congress. Madhav said Nehru himself had said that Article 370 will fade away gradually with time. Now it’s being referred to as sentiment, he said.

“Friends, there is no bigger sentiment than people’s sentiment,” the BJP General Secretary said.

To a question about rumour that after the removal of Article 370, jobs and land will also go, Madhav said, “where will it go? Nothing will be done against the interest of the people. Each job will go to the people of this region.” Madhav urged people not to fall prey to propaganda.

“Utmost caution will be taken to ensure protection of culture, heritage, jobs for the youth and education for Kashmir’s residents,” Madhav said.

He said nepotism and family rule has been the main reason for violence and now new leadership is the need of the hour.

“BJP is ready for creation of new leadership,” he said.

About the shutdown, he said whole world is afraid of Modi, so what are you afraid of.

“Open shops. There is huge rush on the roads. I was stuck in traffic jam at Batamaloo,” IANS quoted Madhav as having said.

Snowfall in Gulmarg, other areas of Kashmir

NHW-44 maintenance
Restriction on vehicular movement on all Fridays till November 30: Traffic police

Mirwaiz leaves for Delhi to appear before NIA