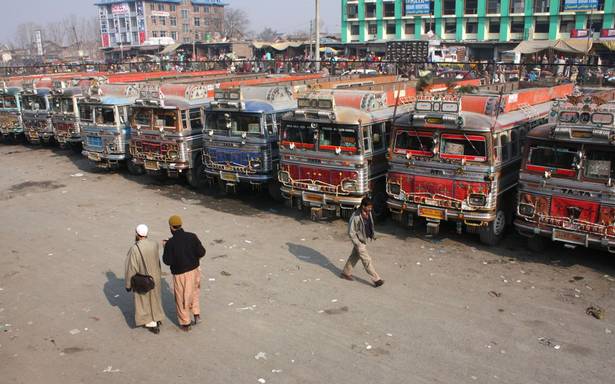 Srinagar, Oct 21 : In the aftermath of abrogation of the Article 370 on August 5, the valley business fraternity and transporters continues to face huge losses due to the spontaneous shutdown. As per the tentative estimates of traders and transporters, the losses to the tune of Rs 2000 Crore have been registered since August 5 to-date.

According to the wire service—the trader’s fraternity continues to conduct their business operations during the wee hours in most of the places in Kashmir including Srinagar whereas public transport continues to remain off the roads even on the day 78h of uneasy calm in valley.

The prevailing uncertainty have taken toll on all sections of the society and have choked the business of the valley based transporters.

Meanwhile, after the passage of more than two months of disrupted situation in the valley with no indication of the restoration of the normalcy, the situation throughout the region continued to remain tense.

Javaid Ahmad, a driver by profession said that, “The prevailing uncertainty continues to create havoc on many of us who are associated with public transport business in Kashmir. Apart from losing my livelihood I am much concerned about the debts that I payoff during the end of my working day as each passing day worsens my financial position and adds a penalty on my long pending debts.”

Javaid said that he cannot operate in the present situation and the risks are high while plying the vehicles on the roads of valley even though he said that he is not in a position to risk his life and property on roads.

He further added that, “There are many transporters like me who have procured loans on their vehicles and most of us have already missed the installments on our loans due to prevailing situation which led to the financial crisis.”  He said that since August 5, they have registered a loss worth Rs 950 Crore as their fleet of 50,000 vehicles remains grounded.

Mohammad Hussain, a shopkeeper based in Srinagar told KNO, “Our business cycle is completely ruined by this uncertainty and we are left in lurch with losses and debts.”

He told that working for couple of hours during the day is not going to work for the entire business community which continues to suffer post abrogation of article 370. He further added, “The spontaneous shutdown reflects the anger against the New Delhi’s sudden decision of rolling back Article 370.” (KNO)

Attack on non-local fruit merchant: At SMHS, a local from Shopian sets new example of humanity