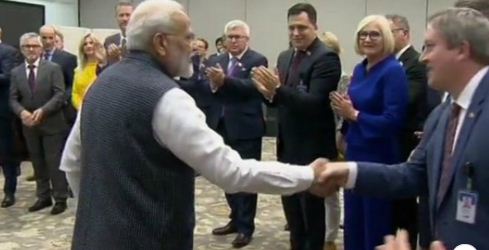 SRINAGAR: Nearly three months after its decision on Article 370, the Union government has decided to allow a delegation of European parliamentarians to travel to Srinagar and see the situation in Kashmir, media reports said on Monday.

Quoting a source from Delhi and Srinagar, a report by The Hindu said that a 28-member delegation comprising Members of the European Parliament (MEPs) from Italy, Britain, France, Germany, and Poland will visit Srinagar on Tuesday. On Monday, they met Prime Minister Narendra Modi and attended a lunch hosted by National Security Advisor (NSA) Ajit Doval. They met a few mainstream Kashmiri leaders, including former Minister Muzaffar Beigh from the PDP and winners of the Block Development Council polls in Jammu and Kashmir last week.

“PM Modi expressed the hope that [the MEPs]have a fruitful visit to various parts of the country, including Jammu and Kashmir,” said an official statement. “Their visit to Jammu and Kashmir should give the delegation a better understanding of the cultural and religious diversity of the region of Jammu, Kashmir and Ladakh; apart from giving them a clear view of the development and governance priorities of the region,” it added.

The visit to Jammu and Kashmir is being coordinated with the NSA’s office, said officials in Srinagar, as he has been the government’s point-person on the move to dilute Article 370 and bifurcate the State into Union Territories on August 5, The Hindu reported.

Govt orders continuation of officials in UTs of JK, Ladakh

Continue to take precautions against COVID19: MMU to people

Panchayat polls: 8.44% votes cast in Baramulla till 11am