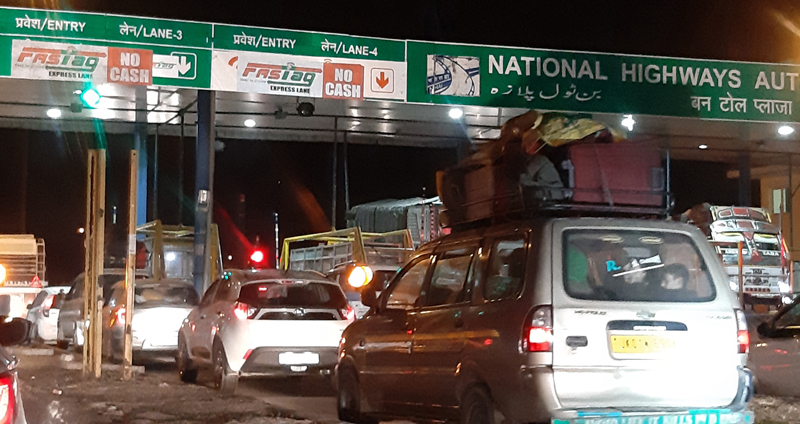 JAMMU : Because of no mobile internet services and poor broadband data speed here, the much talked about electronic toll collection through FASTags has failed to gain momentum here thus forcing the National Highway Authority of India to get J&K Union Territory exempted from mandatory prepaid rechargeable tags for the vehicles by January 15.

Official sources told the Excelsior that only 13-14 percent vehicles crossing all three Toll Plazas in Jammu are fitted with the FASTags while remaining more than 85 percent vehicles are still paying toll tax in cash.

Since December 15, when this prepaid rechargeable tags were earlier announced to be mandatory for all the vehicles across the country, approximately 15000 FASTags have been sold so far through different agencies in J&K, mostly in Jammu since all the three Toll Plazas (at Thandi Khui, Ban and Chenani-Nashri Tunnel) are located here, sources added.

Pertinent to mention that the FASTags were earlier announced to be mandatory for all the vehicles by December 15 this year, but the deadline was later extended by a month due to shortage of tags in the market. After January 15, vehicles without FASTags will have to pay up twice the normal rate at toll gates across the country. Introduced in 2014, FASTags affixed on vehicle windscreens enable toll to be debited from a linked account, without requiring vehicles to stop for transactions. More than one crore FASTags have been issued so far across the country.

However, official sources said, only 13 to 14 percent vehicles passing through Toll Plazas in Jammu are fitted with the FASTags so far and the number is likely to increase up to 25 percent by January 15, 2020, which is the renewed deadline for this prepaid rechargeable tags to be mandatory.

Because of no mobile internet and poor broadband data speed in J&K, sale of FASTags has failed to pick up here and so far around 15000 prepaid rechargeable tags have been sold in J&K through different agencies, sources added.

Approximately 7000 FASTags have been sold by National Highway Authority of India at Points of Sale (PoS) near Toll Plazas, few Patrol Pumps etc and more than 6000 at the banks across J&K. While exact figure of FASTag sale through Amazon, Flipkart and Paytm Mall is not available, the same is likely to be around 1500, sources elaborated Daily Excelsior reported.
“Hence, because of no internet service and consequent low sale of FASTags here, the National Highway Authority of India has decided to exempt J&K Toll Plazas from mandatory electronic toll collection,” said Ajay Kumar Rajak, Project Director NHAI.

While elaborating, he said that the matter was brought into the notice of higher authorities at New Delhi and after their approval, a decision has been taken not to convert all the lanes as FASTag only till restoration of the internet services and further orders.

“Presently at all the Toll Plazas here, only two out of eight lanes have been made ‘cashless’ while two more lanes are partially converted into ‘cashless’ during the lean hours,” the Project Director further informed reported Daily Excelsior.

No Pak player to be part of Asia XI in Bangla T20s: BCCI

Law and order in insurgency-hit J&K similar to any other province: Governor