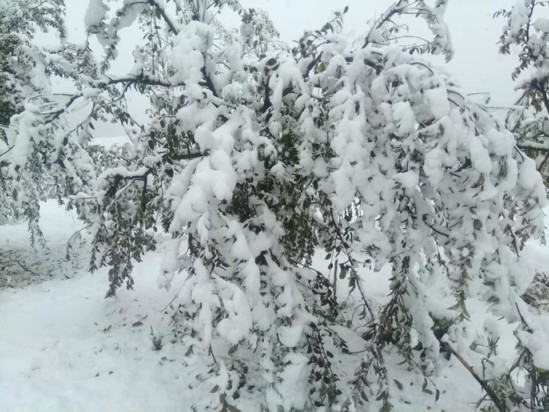 Srinagar, Jan 14 : At least 11 persons including for Army men and were killed in separate snow avalanches across Kashmir on Tuesday, officials said.

Officials said that five soldiers went missing after an avalanche hit Maidan Beigh area of Machil sector on Tuesday morning, adding that a rescue operation was launched soon after the incident took place.

Bodies of four soldiers were recovered by the Army in the area, however, another soldier was found alive and he is undergoing treatment, officials said, adding that avalanche hit the post of Echo Company of 45 RR stationed at Machil sector.

Senior Superintendent of Police (SSP) Kupwara, Sriram Ambarkar Dinkar told KNO that four soldiers were killed in an avalanche in Machil sector while another was rescued alive.

Meanwhile, in another incident four members of a family were injured after avalanche hit Purana Tulail (PTL) area of Gurez sector on Monday evening. An official said that one of the injured persons succumbed to his injuries today morning. The deceased was identified as Abdul Rehman Lone of PTL.

He said that the injured were identified as Fatima, Nazir Ahmad and Fatima. They were being treated at a health facility in PTL.

In another incident at Nowgam sector, a Border Security Force (BSF) man was killed and six others were rescued after an avalanche along the Line of Control (LoC), officials said, adding that the incident took place in the wee hours of this morning.

Officials said that a rescue operation was launched soon after the avalanche hit the area in which seven BSF personnel were missing, adding that one among them was found dead while six others were rescued.

Five more civilians were killed in a separate snow avalanche that struck in Gagangir area of central Kashmir’s Ganderbal district, officials said, adding that four others were rescued during the rescue operation launched after the avalanche hit the area.

The rescue operation was jointly launched by police and army, they said. According to reports, another avalanche hit Khambiyal forest area of Dawar, causing damage a hotel near Tourist Reception Centre (TRC) Gurez.

The snow avalanches have also led to the killing of livestock with officials informing that 30 sheep were killed in Awoora area of Kupwara after they came under heavy snow.

Senior Superintendent of Police (SSP) Kupwara, Sriram Ambarkar Dinkar said that 30 sheep belonging to a shepherd were killed after coming under heavy snow in Awoora area.

An Army porter identified as Fakeer Khan, son of Gulzar Ahmad of Baduaab Tulail had also come under snow last evening near Baduaab. Khan as per officials was rescued by police and army and was shifted to a nearby health facility. He was working with 51 RR as porter, reports said.

Meanwhile, Army spokesman in a statement issued to KNO said that a group of tourists were rescued by multiple search and rescue columns of the Fore & Fury Corps.

A group of tourists were stranded in bad weather while undertaking the annual ‘Chaddar Trek’ on the frozen Zanskar River in Ladakh, Army spokesman said. “Responding swiftly to request received from the UT administration, columns were launched from two directions to reach the tourists who were stuck at Niraq Village along the Zanskar River.

The statement further reads that six seriously ill tourists who were suffering from effects of frostbite and High Altitude Pulmonary Odema (HAPO) were evacuated by the helicopters to the Army medical facility in Leh. (KNO)

NIA carries out raids in Bandipora, man detained for questioning

Mughal road closed due to landslides