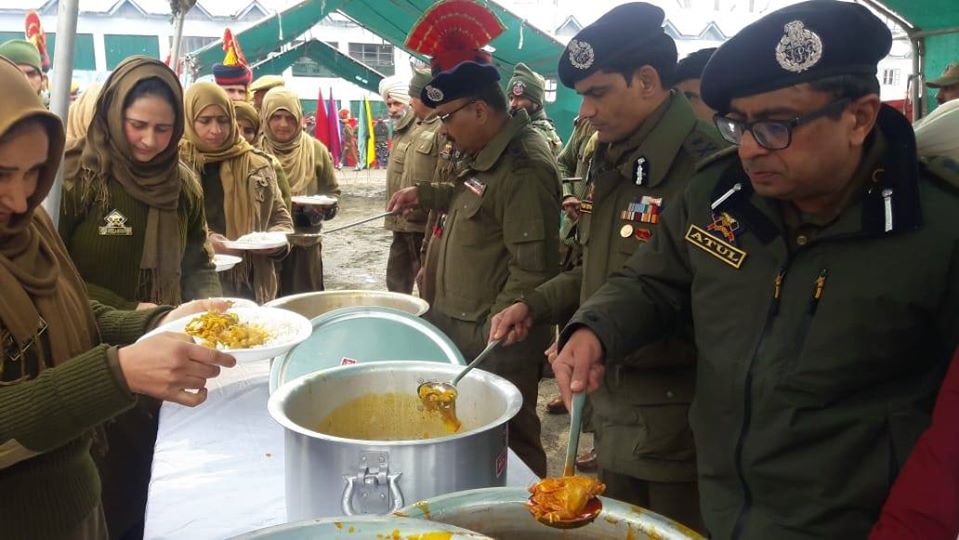 While addressing the police personnel the DGP J&K stressed upon all ranks of Police to improve their proficiency and gain more and more public confidence. Reiterating that safety of human lives and public property has remained among top priorities of the force, he said that J&K Police despite facing tough challenges, has succeeded in creating environment of security among the public.

The DGP said that with the active cooperation of the people, police alongwith security forces has succeeded in bringing peace and it is our endeavour to keep the peace maintained at all levels. DGP J&K heard the police personnel patiently and assured them that their genuine problems would be looked into on priority.

The DGP complimented Police personnel for handling different challenges successfully and stressed upon them to continue work with the same dedication in future. He said that exemplary work of the J&K Police has been acknowledged by the Hon’ble Prime Minister of India Shri Narendra Modi and Hon’ble Home Minister of India Shri Amit Shah. The DGP also expressed his gratitude to Union Railway Minister Shri Piyush Goyal who during his public meeting at Akhnoor lauded the role of J&K Police in maintaining peace and order in the Union Territory. It may be recalled that the Union Minister during his public meeting at Akhnoor as a token of appreciation for J&K Police presented bouquets to SP Rural Jammu Shri Suram Singh and SDPO Akhnoor Shri Ajay Sharma.

The DGP said that police personnel must deal strictly with the elements who are hell-bent on pushing the youth towards terrorism and also are involved in radicalizing the youth. He directed the police officers to carryout fight against drugs in a mission mode and book the persons involved in peddling activities.

The Darbar besides the Jawans of Anantnag District was also attended by DIG SKR Shri Atul Goel, SSP Anantnag Shri Altaf Ahmad Khan, SP Kulgam Shri Gurinderpal Singh, other senior and jurisdictional officers of the District. The DGP also had bara-khana with the Jawans which was arranged on his directions for the police personnel.

During his interaction with the Police officers and jawans at the Police Station Nageen the DGP complimented them for successful busting of Jaish-e-Mohammad terror module which was involved in grenade attacks of Hazratbal jurisdiction and also recovery of huge cache of explosive materials including Gelatin Sticks, explosives, detonators, arms, explosive body vests, batteries, nitric acid etc.

Spontaneous shutdown in parts of Kashmir