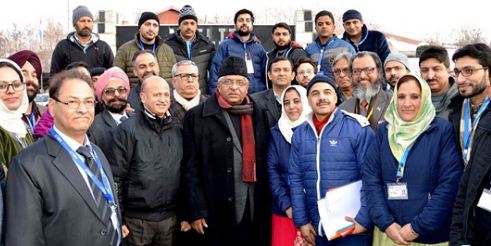 A bulky report on Jammu and Kashmir, based on the inputs received from more than 30 Union Ministers, has been compiled by the home ministry. In January, 37 Central ministers visited Jammu and Kashmir to assess the ground situation and interact with the locals regarding various development schemes, NDTV reported.

“All the mantris have given lots of suggestions on what steps can be taken to further enhance the development activity by the Centre,” NDTV  quoted a senior functionary in the government as having said.

The focus will be on developing remote areas this summer, he said. The list would include roads for better connectivity, electricity regularisation and more gas connections, said the report.

“As of now, over 30 ministers have submitted their reports and we have compiled it and sent it to Prime Minister’s Office,” said a senior officer.

The reports submitted by the ministers were based on a performa set up by PMO. “The focus was on how welfare schemes are being implemented and what other issues should be focused on,” explains an officer.

The ministers visited Jammu and Kashmir following a directive from Prime Minister Narendra Modi, who wanted an honest assessment of various welfare schemes being carried out in the newly created Union Territory.

“The ministers were asked to focus on development initiatives and not political issues,” the official said.

While interacting with the local people, the ministers got first-hand information about the local roads, healthcare facilities, power situation, functioning of academic institutions besides others.

There were two sets of feedback — one on the initiatives taken by the UT administration and the other about the central government initiatives, another official said.

Most of the central ministers stayed overnight wherever they visited — Baramulla, Ganderbal, Doda and other places.

In August, the Centre had scrapped the special status to granted to Jammu and Kashmir under the Constitution’s Article 370 and bifurcated it into two Union Territories. Since then, the government has been closely monitoring the implementation of various development programmes on the ground, reported NDTV.

Trump Visit: US Senators Writes To Secretary On Kashmir

If standing up for my people makes me a separatist, it is a badge I will wear with honour: Mehbooba