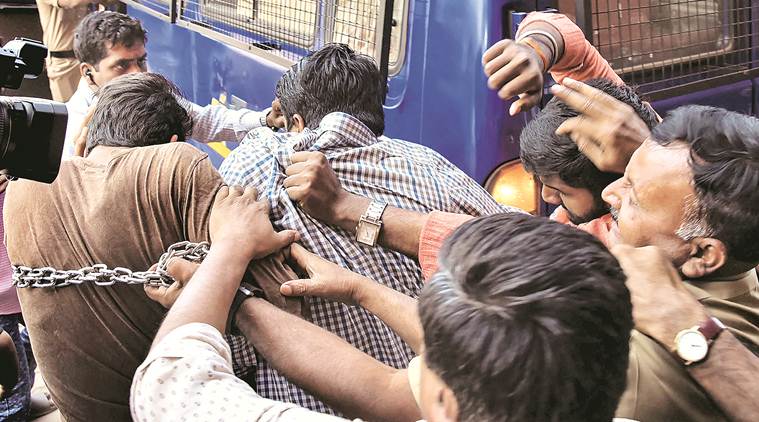 THREE engineering students from Jammu and Kashmir (J&K), who were arrested on charges of sedition on Saturday but released a day later due to “deficient evidence”, were re-arrested on Monday following protests by members of Hindutva groups like the Bajrang Dal.

The three students — Basit Aashiq Sofi from Baramulla, Talib Majeed and Amir Mohiuddin Wani from Anantnag, all studying at the KLE Institute of Technology in Hubbali — were sent to judicial custody till March 2 by a local court reported Indian Express.

On Saturday, the youths were arrested over a video circulated on social media, which purportedly showed them singing along with a song playing in the background with the words `Pakistan Zindabad’. They were charged with sedition and promoting enmity.

But on Sunday, the students were released by the Hubbali police under Section 169 of the Code Of Criminal Procedure (release of accused when evidence deficient). However, after their release triggered protests by Hindutva groups, the Hubbali police arrested the youths again and produced them in court on Monday. “They have been arrested, produced before the court and remanded to judicial custody,” Hubballi Police Commissioner R Dileep said reported Indian Express.

Police had to protect the youths from protesters, who threw slippers and targeted the police van in which they were brought to court.

The video was allegedly recorded by the students in Prerana Hostel of the KLE Institute of Technology. “They gathered in their room and recorded a pro-Pakistan video. It seemed to have been done to mark the lapse of a year since the Pulwama attack. We summoned the students after we learned about the video,’’ said Anami. After the video went viral on social media in Hubbali region on Friday, activists of Hindutva groups approached the college authorities and sought police action against the students reported Indian Express.

Elections In J&K Futile, Benefits Those Who Want To Prolong Final K-Settlement: Bar