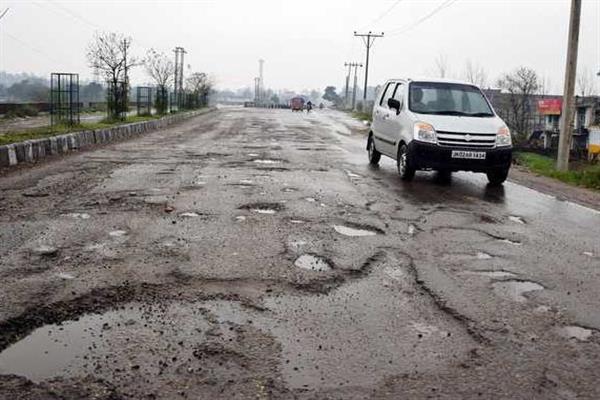 Sopore, March 16 (KINS): Residents of Posh Bagh Amargarh of Sopore in north Kashmir’s Baramulla district are up in arms against the administration for failing to repair of roads.

Fed up with civic apathy, the residents of Poshbagh Arampora of Sopore Monday staged a demonstration against Roads and Buildings Department (R&B).

“How many more have to die and suffer? Repair roads.  Proper roads-Good Health and  End our suffering,” reads the placards that protestors were carrying.

A woman protestor while talking with Kashmir Indepth News Service (KINS) said it’s been more than a year and they have been suffering because these roads are in a pathetic condition.

“The entire stretch gets flooded when it rains and becomes slippery. It is more like a death trap,” she said.

Sajad Ahmed a resident said this road is in a pathetic condition that needs immediate repairing.

He said the R&B Sopore has not responded to their repeated pleas to provide a proper drainage system.

Abdul Samad another protestor said residents face problems such as water logging during rains. “The problem gets manifold due to the absence of a proper drainage system in the locality,” he added.

He said the department is working round the clock for the relief of public. He however, said if there is a water-logging problem the residents should contact fire service department so that they can come and can provide relief to the people. The officer said commented on the drainage system said that funds are very less and as soon as there is an increase in funds work will be started accordingly. (KINS)

Coronavirus scare: All is well with us, Say CRPF