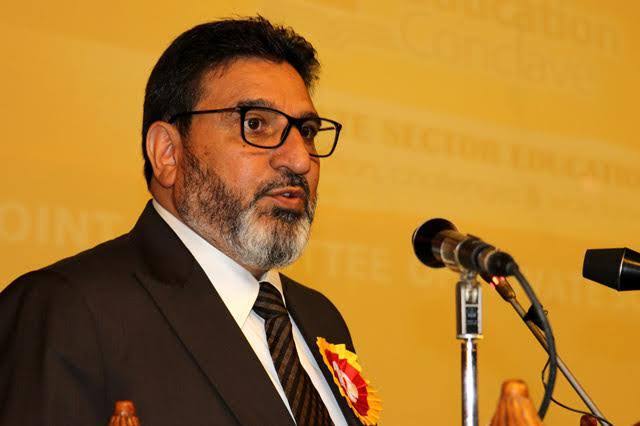 Demands Order be put in abeyance till COVID Pandemic is over

SRINAGAR, April 1: Taking a strong exception to the central government order defining domicile law for J&K, Jammu Kashmir Apni Party (JKAP) president Syed Mohammad Altaf Bukhari on Wednesday demanded that the order be put in abeyance till the COVID-19 pandemic is over.

“It is most unfortunate that such an important order has been issued at a time when the whole country is battling for its survival and is under strict lockdown to stem spread of deadly Coronavirus disease. While JKAP had been vehemently demanding Domicile Rights on land and jobs for the people of Jammu and Kashmir, the order issued by the union government reflects a casual exercise carried out at bureaucratic level without taking aspirations and expectations of people into consideration,” Bukhari said.

He demanded that the order be put in abeyance till the country is out of dangers arising out of COVID-19 deadly disease. “This Order in its entirety is a casual attempt, cosmetic in nature, to hoodwink the people of Jammu and Kashmir who genuinely believed that post October 31, 2019 their rights and privileges in the matter of employment and other rights would remain as it had been,” the JKAP president remarked.

He said that being a government issued order and not a law made by the Parliament, the new gazette notification regarding domicile rule for J&K is not immune to any judicial review.  “The order issued is totally unacceptable to JKAP. In the matter of employment—non Gazetted, Gazetted posts in the service and admissions to professional colleges, a tangible legal and constitutional mechanism was supposed to be put in place to safeguard and protect these privileges of the people of Jammu and Kashmir who had been the permanent residents of J&K,” Bukhari observed.

Commenting on various vague sections of the order, the JKAP president demanded threadbare discussions with all stake holders of Jammu and Kashmir to be held at an appropriate time to remove these anomalies.

The section of the Order pertaining to “The Jammu and Kashmir Civil Services (Decentralization and Recruitment) Act” providing protections to jobs for the residents of Jammu and Kashmir upto a definite pay scale (Level 4/25500), Bukhari said the same has left  other level of government jobs free for all, which is totally unacceptable to JKAP.

“This section of the order is antithesis to what was promised by the Prime Minister and Home Minister on the floor of Parliament assuring a better domicile law for the residents of J&K than what is being enjoyed by the people in other states of the country,” he added.

The JKAP president said the introduction of clause expanding to include those who have studied for a period of seven years and appeared in class 10th/12th examination in an educational institution located in the UT of J&K is totally contradictory and provides a tunnel for the non residents of J&K to easily encroach upon the job protections which were available to them prior to October 31, 2019.