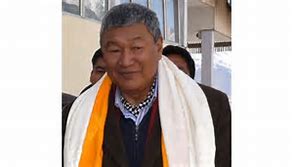 Srinagar, May 04 (KINS): The former BJP president from Ladakh Union Territory Cherring Dorjay Monday made some startling revelations about his differences with the party high command. He claimed that the party wants to control Ladakh affairs from Jammu leaving both the autonomous hill councils of Leh and Kargil literally defunct.

Cheering Dorjay who was also minister in the PDP-BJP Mehbooba Mufti led government said that people of Leh and Kargil spilled their blood and sweat for making two autonomous hill councils functional and two separate councils so that governance flourishes in both the districts of Ladakh, but “BJP wants to control all governance affairs from Jammu”.

In an exclusive chat with the news agency KINS over phone, Dorjay, who yesterday tendered his resignation from the BJP as Ladakh party president said that even though he had mentioned many reasons why he took such an extreme step but there were still some more left.

“We had a grudge against Kashmiris and that they take a major share of funds that come from Centre and also get huge share in jobs etc. But now we are of the belief that BJP wants to control Ladakh from Jammu as our both hill councils have been literally left defunct and directions are flowing from Jammu itself,” Dorjay claimed.

“This isn’t acceptable to us. We have worked for years together and ensured that the Leh autonomous hill development council and Kargil autonomous hill development councils flourishes and remains the power house for Leh and Kargil districts respectively. But since directions are coming from Jammu, these councils are defunct, which is not acceptable to us at all,” he said.

Similarly, he said that another reason to submit his resignation was that Ladakh remains closed for six months after six months, there is a shortage of stock. “Our Zogila tunnel has been kept shut for the reasons that Covid pandemic has hit Ladakh. So our supply chain of essential commodities has got chocked. There is obviously politics to make Ladakh more dependent on Centre and yet again directions will come from Jammu,” he said.

Dorjay, however, ruled out joining any other new party or launching any new group or even joining back the BJP. “When I have divorced the BJP, no question of joining them back,” he said.

Earlier, on Sunday, Dorjay had tendered his resignation citing the failure of UT administration to evacuate Ladakhi passengers, patients, pilgrims and students stranded at various places in the country.

He had submitted his resignation to the BJP national president, JP Nadda through a letter that states that the UT administration has failed in evacuating Ladakhi people stranded at different places throughout India.(KINS)