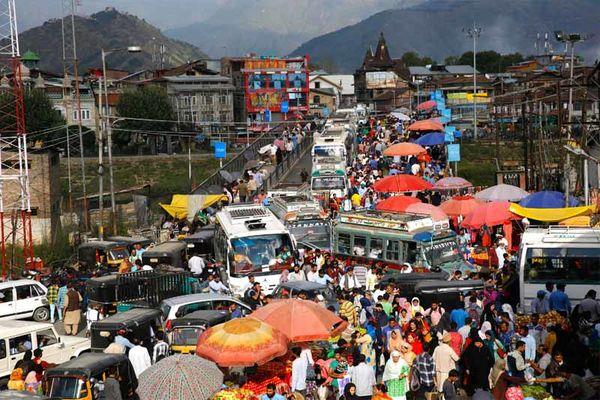 Srinagar, June 10 : The Srinagar district administration on Wednesday convened a meeting with all trade and business bodies for discussing a workable mechanism for gradual economic revival even as its focus remains intact on COVID-19 containment and spreading awareness about SOPs required to be followed at public places.

The official sources while talking to news agency— said that the order regarding the opening of markets across the district would likely be issued tomorrow (Thursday).

The meeting was convened under the chairmanship of the Deputy Commissioner Srinagar Dr Shahid Iqbal Choudhary. Senior Superintendent of Police Dr Haseeb Mughal, ADCs Haneef Balkhi and Sajjad Qadri, RTO Ikramullah Tak and other senior officers were all present in the meeting.

Extensive discussions were held during the meeting in which all relevant aspects were covered and the critical importance of containment efforts and adherence to all guidelines and SOPs was emphasized. Discussions about it revolved around the J&K State Executive Committee notification dated 7 June 2020 and how guidelines as contained therein can be complied with in total.

During the meeting the guidelines and activities as permissible in red zone districts were read out and explained to participants. It is notable that the SEC notification calls for regulated and gradual opening of 50% shops under strict measures and SOPs to be followed to avoid public gatherings and congestion in view of the continued threat from the novel coronavirus.

Speaking on the occasion the DC talked about different options and workable solutions for a balanced and gradual opening of markets that the administration is working on and wants to explore adding that it revolves around the focus on measures to prevent spread of the COVID-19 disease. He said the latter includes public awareness and stakeholdership as important components thereof.

Dr Shahid emphasised the importance of building capacities of local market associations before opening and offering services and called upon all trade associations and business bodies to put in place a mechanism of operation which will ensure that guidelines – for mandatory wearing of face masks, physical distancing and sanitisation – are adhered to in letter and spirit and that no kind of violation is tolerated.

SSP Srinagar Dr Haseeb Mughal while speaking on the occasion talked about various issues related to law and order and solicited active cooperation of trade organisations. He stressed the crucial importance of local measures and active and sustained efforts of all trade associations to curb congestion in markets which he said will indicate the adherence to distancing guidelines.

While discussing different options and plans the administration also obtained feedback and suggestions from trade and business associations and bodies. The traders were asked to give suggestions how sector-wise or trade-wise or market-wise opening of markets can be made workable and something that will ensure adherence to SOPs. Discussions in this regard were also held on other aspects and options like timings and time-slots that markets can open and ensure gatherings are avoided.

The trade associations and business bodies of the district who were all present on the occasion unanimously agreed that COVID-19 containment efforts should be at top of the list of priorities and everything else must revolve around it being in the interest of public safety. The bodies assured of putting in place a mechanism which will ensure that all guidelines and SOPs are adhered to in all markets thereunder and no violation is accepted or tolerated.

Some of the trade bodies which were present on the occasion include Kashmir Chamber of Commerce & Industry, Kashmir Economic Alliance, Kashmir Traders & Manufacturing Federation, J&K Economic Confederation, Sher-e-Khas Traders Association, Coordination Committee among others. Presidents of all these bodies attended the meeting and took part in detailed deliberations and discussion about various proposals put on the table on the occasion.

It is notable that June 7 notification of the government allows opening of 50 percent shops in red zone districts — the permission being subject to mandatory adherence to SOPs and no parking on roads in markets. The government has asked the district administrations to formulate plans in this regard and it is in view of these instructions the trade organisations are being involved in efforts to work out workable plans and put in place measures required therefore.

The Srinagar administration has said that pursuant to today’s meeting with trade and business bodies a notification will be issued indicating the manner in which trade and business operations and activities will resume in gradual fashion starting this week. It said the said manner will have taken into account the required measures for COVID-19 containment that need taking in view of over 50 localities in the district notified as containment zones. It said it will consider the recommendations and suggestions of trade bodies as noted in the meeting.

Dr Shahid while making concluding remarks appreciated the trade and business bodies for their understanding of the situation in view of the COVID-19 pandemic and encouraging response therefrom to the critical need to ensure hundred percent adherence to SOPs and guidelines that the government has issued or will issue.

He said it is heartening to know that the trade bodies of the district appreciate the risks and efforts required to curb the spread of this disease and their agreement to the proposed opening of markets in a gradual manner in compliance with norms notified as notified by the SEC.

He assured the trade bodies of immediate and best possible solutions aimed at revival of trade and business even as the administration’s focus will remain on COVID-19 containment efforts as long as it is required. He sought assistance in spreading awareness about risks of gatherings and importance of avoiding them.