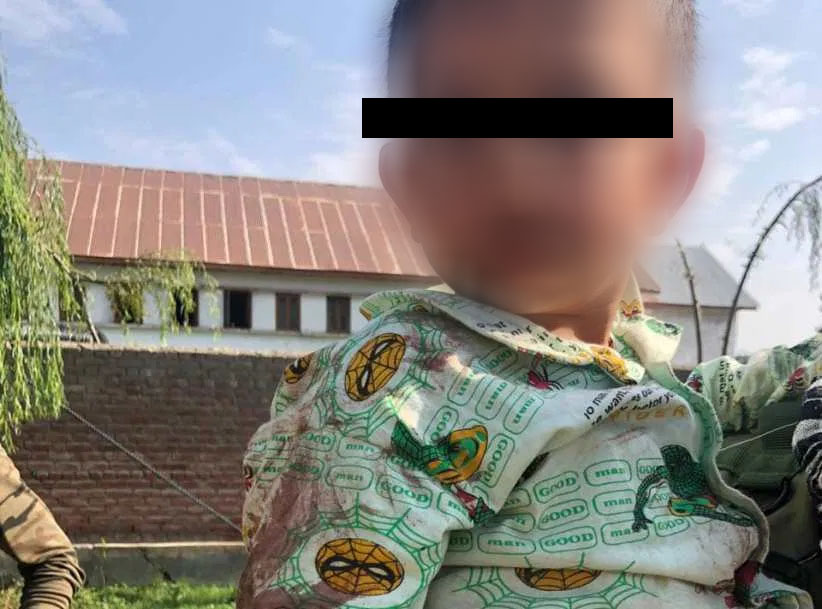 Srinagar, July 1(KINS): Even as heart wrenching pictures of the little boy wailing over the body of his grandfather at the Sopore shootout have moved every heart in Kashmir, many people have showered praises and hailed the efforts of Jammu and Kashmir police for the timely rescue of 3-year-old Ayaad.

“Whatever the case, but Police men deserve applauds for saving the boy who was caught in the crossfire where his grandfather died. We couldn’t control our tears after seeing the boy wailing over the body of his grandfather,” a local resident of Sopore, who was eye-witness to the incident told news agency Kashmir In-depth News Service(KINS).

He said many people left behind their vehicle at the model town Sopore, after the firing, they ran for safety. “But one vehicle driver who was holding a kid tight in his lap was struggling to save the kid,” he said.

Another local Abdur Rashid, said that after the man fell on ground as he was hit by bullets, policemen without wasting any time rescued the little boy in a very professional manner. “I saw a policeman asking the boy to come towards him after which he took him in his lap safely,” he said.

Kashmir police also tweeted on its official handle that “police men rescued the boy during the firing incident at Sopore.”

CRPF in a statement issued here said that militants were hiding in the attic of a nearby mosque at Sopore and when CRPF men were deployed for patrolling duty, militnats fired indiscriminately at the forces in which four CRPF men sustained injuries of which one succumbed. “A civilian also got killed in the militant act,” they said.

Sopore police also issued a statement refuting the reports that the slain civilian identified as Bashir Ahmed Khan was dragged out of his vehicle and fired by forces stating that the man died in the militant firing. Slain man’s son and daughter had alleged that their father was dragged out of his vehicle and killed in “cold blood.” J&K Apni Party led by former minister Syed Altaf Bukhari has demanded impartial inquiry into the killing of civilian at Sopore.(KINS)

3-yr-old boy witnesses killing of his grandfather in Sopore,