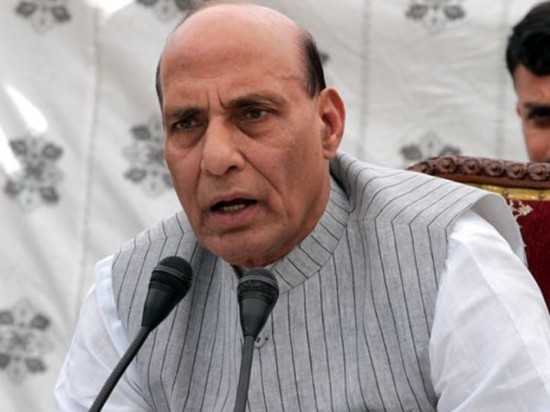 Defence Minister Rajnath Singh is scheduled to visit Ladakh on Friday to take stock of India’s military preparedness in the wake of a bitter border standoff with the Chinese troops in the region, government sources said.

To be accompanied by Chief of Army Staff Gen M M Naravane, it will be the defence minister’s first visit to Ladakh after the standoff between the two armies began on May 5.

During his visit, Singh will carry out a comprehensive review of the security situation in the region with Gen Naravane, Northern Army Commander Lt Gen Yogesh Kumar Joshi, Commander of the 14 Corps Lt Gen Harinder Singh and other senior Army officials, sources said.

The visit is also aimed at boosting morale of the army personnel engaged in the seven-week bitter border faceoff with the Chinese troops in the region, sources added.

The Army Chief visited Ladakh on June 23 and 24 during which he held a series of meetings with senior army officials and visited various forward areas in eastern Ladakh. Gen Naravane earlier visited Leh on May 22.

The Indian and Chinese armies are locked in a standoff position at multiple locations in eastern Ladakh for the last seven weeks. The tension escalated manifold after 20 Indian soldiers were killed in a violent clash in Galwan Valley on June 15.

The Chinese side also suffered casualties but it is yet to give out the details.

The defence minister’s visit to the region comes in the midst of India significantly ramping up the number of troops and weaponry along the Line of Actual Control(LAC) in the easern Ladakh region.

Following the Galwan Valley clashes, the army has sent thousands of additional troops to forward locations along the border besides moving in heavy weapons.

The IAF has also moved air defence systems as well as a sizeable number of its frontline combat jets and attack helicopters to several key air bases.

On Tuesday, the Indian and Chinese armies held the third round of Lt General-level talks during which both sides agreed on the need for an “expeditious, phased and stepwise” de-escalation as a “priority” to end the standoff.

However, military sources did not give any indications of early resolution of the standoff, and said it may continue till winters.

The process of disengagement along the LAC is “complex”, sources said but added that the 12-hour discussions on Tuesday reflected the commitment of both sides to reduce tensions in the region.

The Tuesday talks took place on the Indian side of the LAC in Chushul sector in eastern Ladakh.

The Indian delegation at the meeting was headed by 14 Corps Commander Lt Gen Singh while the Chinese side was led by the Commander of the Tibet Military District Major General Liu Lin.

It was the third senior military commander level engagement to discuss issues related to disengagement at the faceoff sites along the LAC and de-escalation in the border areas.

In the previous two rounds of talks, the Indian side demanded immediate withdrawal of Chinese troops from various areas in the region.

Following the Galwan Valley incident, the government has given the armed forces “full freedom” to give a “befitting” response to any Chinese misadventure along the LAC, the 3,500-km de-facto border, sources said.

The first round of the Lt General talks was held on June 6 during which both sides finalised an agreement to disengage gradually from all the standoff points beginning with Galwan Valley.

However, the situation deteriorated following the Galwan Valley clashes as the two sides significantly bolstered their deployments in most areas along the LAC. The situation in eastern Ladakh deteriorated after around 250 Chinese and Indian soldiers were engaged in a violent face-off on May 5 and 6. The incident in Pangong Tso was followed by a similar incident in north Sikkim on May 9.

MHRD says no to reopening of educational institutions