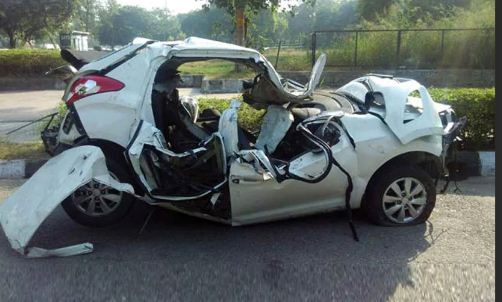 SRINAGAR, July 5(KINS): Amid increase in road accidents, the government has failed to take any measures for prevention of such incidents.

As per Union Ministry of Road Transport and Highways, Jammu and Kashmir ranks second across India in the tally of road accidents per 10,000 vehicles with an average of over 900 deaths every year in the last five years.

As per the figures of Traffic Department, over 9000 people died and almost 80,000 got injured in 56000 road accidents for last nine years.

As per data availiable with news agency (KINS) regarding the road mishaps which took place in parts of the union territory of Jammu and Kashmir in the month of June.

On June 04 a road mishap took place in north Kashmir’s Pattan village when a tractor turned turtle resluting death to one persons while in the mishap two persons were injured. The deceased was indentifed Ghulam Hassan Khan son of Abdul Ahad Khan of Wanigam Bala.

On June 07 : A 35-year-old woman was killed in a road accident at Kanewan area of Bijbehara area of South Kashmir’s Ananthnag district who was identified as Shaheena wife of Nisar Ahmad Bhat of Banderpora Ananthnag.

On June 08 : One person was killed while two others were injured in Delina village of north Kashmiri’s Baramulla district. The deceased was identified as Mohammad Sadiq Pandith son of Mohammad Akbar Pandith of Hamray Sopore.

June 09 : A 40-year-old woman was killed in a road accident at Kokernag area of South Kashmir’s Ananthnag district identified as Kulsoma wife of Mohammad Yousuf Wani of Vailoo Kokernag.

June 10 : A 22-year-old youth identified as Likayat Ahmad Chechi son of Nazir Ahmad Chechi of Fraw Ganderbal was killed in a road mishap in central Kashmir.

June 11 : An army soldier was killed while another was injured in a road mishap at Ranga pass along Srinagar-leh highway in Central Kashmir’s Ganderbal district. The deceased was identified as Karan Singh of Nagrota Jammu.

June 16 : A 20-year-old youth of Bandpora was killed in Hyderpora Srinagar, in the mishap one person was also injured. The deceased was identified as Yaseen Ahmad Khan son of Farooq Ahmad Khan of Suderkoot Bandipora.

June 24 : One killed two injured in Ramban road mishap the deceased was identified as Kehar Singh.

June 26 : A 12-year-old boy was killed in a road mishap after coming under an Army vehicle in Shadipora, Kigam in north Kashmir’s Kupwara district.

June 28 : A 13-month-old baby from Ahwatoo area was killed in a road accident in South Kashmir’s Kulgam.

June 30 : Two persons were killed in two separate accidents in south Kashmir’s Kulgam district. A 33-year-old man was crushed to death after he came under a Hydra crane in Wanpoh area of Kulgam while in another mishap a 38-year-old man was killed after being hit by a loaded automobile in Damjan area of Qazigund.

For last one decade, the government made tall claims to prevent such incidents. However, the government’s announcements have been confined to papers only.

In April 2012, a committee headed by M Y Tarigami submitted a report to the government.

It had come up with a slew of recommendations for the transport, traffic department, R&B, and other departments for curbing the growing road accidents.

It had found increase in the number of vehicles, narrow and faulty roads, negligent driving, and ageing vehicles among the reasons for growing accidents in J&K.

The government, in 2015, had set up a ‘Lead Agency’ to act as the nodal agency to coordinate all activities relating to the road safety in J&K.

However, nothing has been done in this regard so far. Similarly, the government has also failed to set up trauma centres along the highway.

An official of Transport Department said that all these announcements have been confined to papers only.

“The government has also announced implementation of action master plan for curbing on road accidents. All these decisions are yet to be implemented,” the official said.(KINS)

Plight of non-local brides in Kashmir