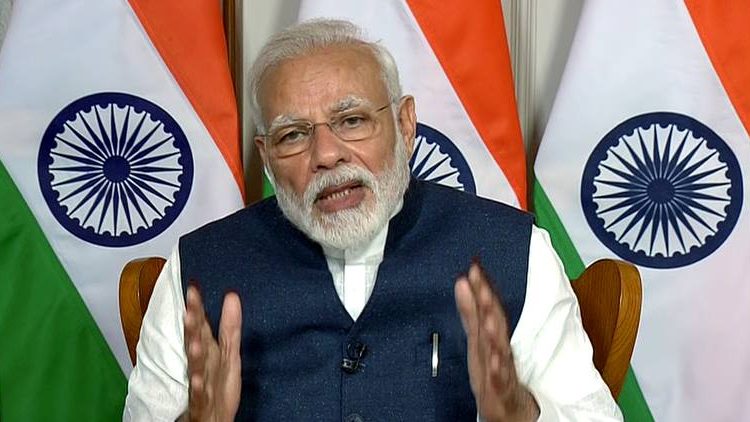 Srinagar, July 26 (KINS): Prime Minister Narendra Modi said India has fought against COVID 19 unitedly and the recovery rate is better as compared to other countries.

He also said the mortality rate is much less as well compared to most countries but asserted that the loss of even one life is saddening, but India has succeeded in saving the lives of millions of people.

The Prime Minister cautioned the people to remain extra vigilant as the hazards of Corona are far from over. He advised everyone to wear face masks whenever they are out in public in order to protect themselves and others from the disease.

Modi urged the youth and people to take a pledge of freedom from the pandemic this Independence day.

He asked people to take a resolve for a Self-reliant India, a resolve to learn and teach something new and a resolve to earnestly carry out duties.

The Prime Minister praised the rural regions for coming up as a beacon of guidance for the entire country during these tough times.

He gave the example of Balbir Kaur from Jammu who is a Sarpanch of a Gram Panchayat named Gram Treva. Balbir Kaur got a 30 bed Quarantine Centre constructed in her Panchayat.

He cited the example of sarpanch Zaitoona Begum of Chauntliwaar, Gaanderbal in Kashmir who distributed free masks and free ration in the vicinity. She also distributed crop seeds and apple saplings so that people did not face any inconvenience. He lauded Mohd Iqbal who is the Municipal President of Anantnag for designing and making a sprayer for sanitization of his area.

Modi highlighted how the youth and women have come up with new experiments on the basis of their talent and skills in the present times of COVID 19. He said many self-help groups in Bihar have begun making masks with Madhubani motifs which are very popular.

These Madhubani masks propagate regional tradition, protect health and also create opportunities for livelihood. He praised artisans of Tripura, Manipur and Assam for crafting high quality eco friendly water bottles and Tiffin-boxes from Bamboo. He also mentioned how more than thirty groups in Bishunpur, Jharkhand are collectively cultivating lemongrass. Mr Modi said many innovations are taking place for enhancing fruit quality, productivity and yield. He named the chooli or apricot fruit in Ladakh and Dragon Fruit in Kutch which have the power to transform the economy of the region. He said innovations are being adopted by local growers to avoid spoilage.

Stressing on the need for innovation, Prime Minister Modi talked about how the youth in Bihar have started to cultivate pearls after gathering information and taking training in Jaipur and Bhubaneswar. They are not only earning and becoming self-reliant but also training the migrant labourers returning from other states at Muzaffarpur, Begusarai and Patna.

He expressed happiness that many people are gearing up to celebrate Rakshabandhan this time by linking the festival with Vocal for Local. He also greeted the nation ahead of Rakshabandhan celebrations

The Prime Minister emphasized that the correct and positive approach always goes a long way in transforming distressing times into opportunities, adversities into triggers of development and progress. He said the nation will celebrate National Handloom Day on 7th of August.

The Prime Minister said a large part of the country is grappling with floods. Many areas of states like Bihar and Assam are dealing with a series of difficulties due to floods. He said the whole nation stands by those affected by this disaster and all Governments, NDRF teams, Disaster response teams, Self help groups are working in tandem to provide relief and rescue in all possible ways.

He urged people to pay special attention to cleanliness and take immunity enhancers such as Ayurvedic kadha during the monsoon season. He said it is imperative that people protect themselves against other diseases during the COVID pandemic.

The Prime Minister congratulated Chandrika Prasad Santokhi for becoming the new President of Suriname and wished him the best on behalf of 130 crore Indians.  Mr Santokhi had participated in the Person of Indian Origin Parliamentary Conference organised in 2018. Mr Modi said it is a matter of pride that Mr Santokhi started his oath with Veda hymns and spoke in Sanskrit.

Pol parties ‘silent’ on abrogation of Art 370, seek restoration of statehood to J&K

Owner of car used in Pulwama suicide bombing identified, missing since the day of attack: Report