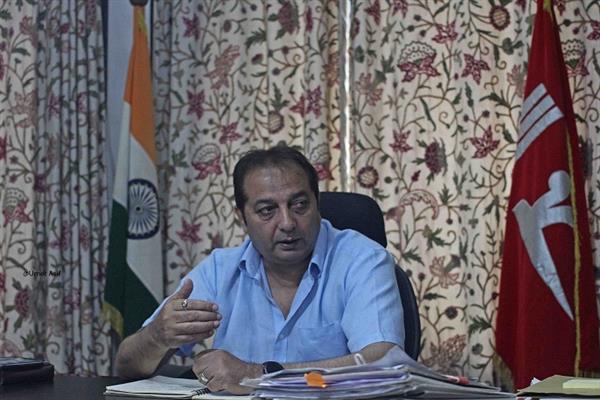 SRINAGAR, AUGUST 13: Advisor to Lieutenant Governor, Baseer Ahmad Khan, today held a public outreach programme at Chadoora in Budgam district and met scores of public delegations and individuals who apprised him of their problems and demands.

Meanwhile, Advisor also inspected various ongoing development works being executed under MGNREGA in Chadoora block and directed the concerned officers to expedite the pace of progress on these vital works for timely completion.

During the public outreach programme, Advisor met various delegations who apprised him of their grievances and demands pertaining to development of their respective areas.

A delegation from B K Pora demanded availability of adequate irrigation facilities besides macadamisation of road in the area and other development issues.

A delegation of Fruit Growers demanded upgradation and expansion of basic infrastructure in fruit Mandi and continuation of Market Intervention Scheme (MIS). Another delegation of traders from the district demanded remission of loans to compensate the losses suffered by them due to COVID-19 lockdown.

Meanwhile, a delegation from Charar-i-Sharief demanded macadamisation of roads in the town and completion of pending road projects in the area besides water supply, bus stand and other issues related to education in their area.

Another delegation from Kanipora demanded replacement of power supply line and electric poles in the area.

A delegation from Nowgam demanded drainage facility and completion of roads under PMGSY.

People from Chattergam, Lolipora, Magam, Wathoora, Nadigam and other areas of the district met the Advisor and projected demands of their respective areas with regard to power, health, education, water, roads.

Advisor Khan assured the deputations and individuals that all their issues would be addressed in a phased manner.

Advisor Khan directed the officers to synergize their efforts so that the targeted results are achieved under various development schemes being implemented in the area. He also asked them to seek public feedback about the status of works being done in their respective areas.

The Advisor enjoined upon the officers to ensure strict adherence to guidelines and safety protocols at all work sites during prevailing crisis.