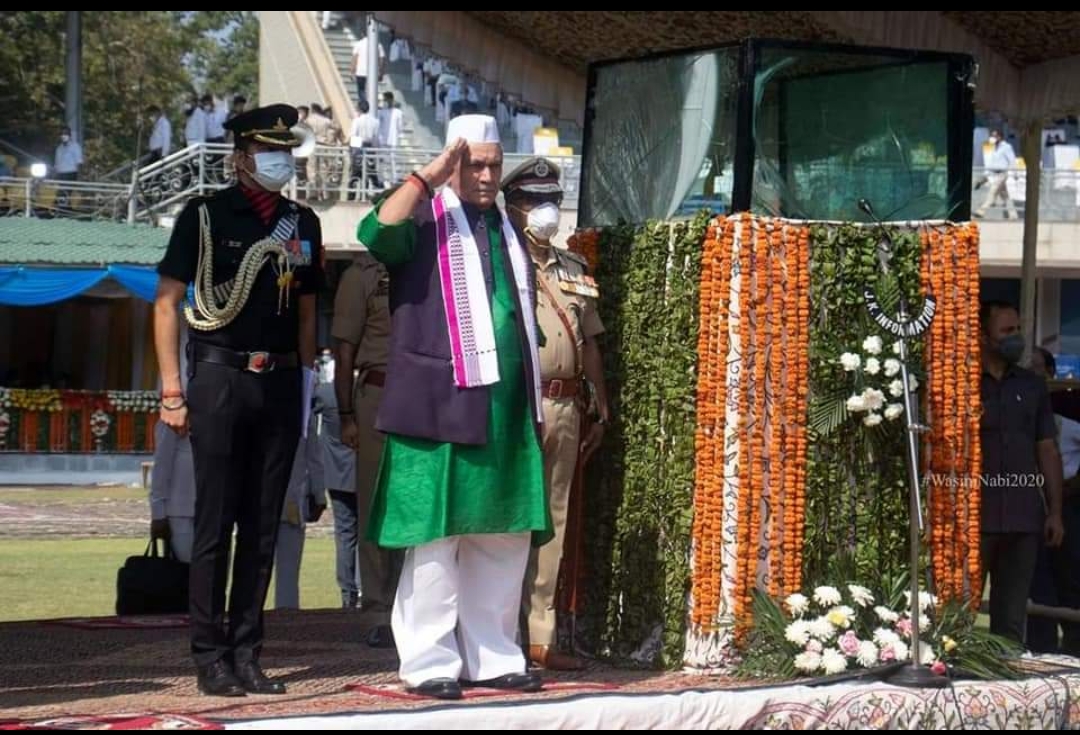 SRINAGAR, AUGUST 15: Like other parts of UT of Jammu and Kashmir, the 74th Independence Day, 2020 celebrations were also held across Kashmir valley with great fervor and enthusiasm.

Apart from the main function held at SK Cricket Stadium, the celebrations were also held at all district and tehsil headquarters where dignitaries unfurled the tricolor and addressed the participants.

At ANANTNAG: The main function was held at GDC Boys Khannabal, where District Development Commissioner Anantnag, KK Sidha unfurled the tricolour and addressed the participants.

The contingents of CRPF, Executive Police, IRP, District Ladies Police, Home guards and District Police Band participated but no parade was held in view of the COVID – 19 situations.

In his Independence Day Speech, the DDC Anantnag praised the role of the frontline workers in creating mass awareness regarding COVID – 19 and combating it.

The DDC on the occasion highlighted the achievements of the district under various sectors besides effective implementation of various centrally sponsored schemes and flagship programmes under, PM KISAN, NREGA, PMAY, PMGSY, DDUY, Jal Shakti Abhiyan and Ayushman Bharat.

Cultural wing of DIC Anantnag presented a colourful programme on the occasion.

Among others, DIG South Kashmir, SSP Anantnag, Commandants of CRPF, IRP and officers from district Administration, ward members, Panchs and Sarpanchs and political leaders were also present on the occasion.

Similar functions were also held at Sub Divisional & Tehsil Levels, where the concerned SDMS and Tehsildars unfurled the tricolour.

At BARAMULLA: The main function of Independence Day was celebrated in District Police Lines, where the Deputy Commissioner Dr G N Itoo unfurled the tricolor and inspected the parade and took salute on the occasion.

The parade was presented by the contingents of J&K Police, CRPF, BSF, Home Guards, Fire and Emergency Services among other bands.

Speaking on the occasion, the DC extended his warm greetings to the people and enlisted various achievements recorded by the district in different sectors and said that several developmental projects having great public significance, have been completed by the administration.

Meanwhile, DC extended his applause to all such officers, officials who worked tirelessly during COVID-19 pandemic and termed them the real COVID-19.

He also said that different welfare schemes and programmes, sponsored by central government are being implemented smoothly so that their benefit reaches at the ground level.

GoC 19 Infantry Division, DIG North Kashmir, SSP, various district and sectoral officers among others were present on the occasion.

Similar functions were also organized at Sub-division and Tehsil levels where the respective BDC chairpersons unfurled the tri-color.

Addressing the function, the Deputy Commissioner congratulated the people on the eve of Independence Day.

The DC said it is for the first time that the border area Keran was connected with Grid Station, thereby providing 14,000 people in four panchayats uninterrupted power supply and added that Machill will also get power supply soon.

He said work is apace on 170 Community Bunkers in border areas of Karnah, Keran and Machill, besides, 750 Individual Bunkers have also been sanctioned to border areas of the district.

On the occasion, Deputy Commissioner felicitated 300 COVID-19 Warriors and Certificates of Appreciation were given to them through concerned District officers.

A variety of Cultural programmes were presented by local artists and martial art was performed by the children.

At BUDGAM: Deputy Commissioner Budgam, Shahbaz Ahmed Mirza on the occasion of Independence Day unfurled the tricolor and took salute from the contingents of JKP, JKAP, CRPF, Auxiliary police and Home Guards at the main function venue sports Stadium Budgam.

In his address, the DC highlighted the development scenario of the district especially projects completed by various departments during the last year and other projects that are at the verge of completion besides, targets achieved under various governmental schemes.

The DDC also spoke about the launching of Nasha Mukt Abhiyan in district Budgam from today.

Regarding tackling COVID-19 urgencies across the district the DDC hailed the efforts of all concerned and appealed to the general public to strictly adhere to all SOPs besides maintaining social distancing to keep Covid at bay.

On the occasion, DDC also presented awards and mementos to selected officers, officials representing different organizations and departments for their meritorious service they have rendered.

During the celebrations the dignitaries present include prominent political workers, security officers, all district and sectoral officers besides large gathering of officials from other departments.

The Independence Day celebrations were also held at all tehsil headquarters, besides BDCs also unfurled the tricolor and celebrated the day in their respective jurisdictions.

In his address, the Deputy Commissioner congratulated the people on the 74th Independence Day and hailed the rich heritage of the district.

DC said that Pulwama has become synonymous with Industrial growth, excellence in education, entrepreneurship and tourism.

He highlighted various developmental works and achievements of    the district and said that Pulwama leads in the saffron, almond, milk and poultry production in Kashmir valley and has potential to    make the district economically vibrant and self-sufficient.

On the occasion, Local Artists presented various Cultural items and skits whereas a demo of Sqay martial art was also performed by martial art academy Pampore.

Meanwhile employees of various departments who have done exemplary work during Covid-19 Pandemic were awarded with certificates of appreciation and prizes. Whereas meritorious students were also felicitated who have shown exemplary performance in the field of education and sports.

Similar functions were held at Awantipora and Tral where concerned Additional Deputy Commissioners unfurled the national flag, inspected the parade and took salute at the march past.

At KULGAM: The main function was held at District Police Lines where Deputy Commissioner, Showkat Ajaz Bhat hoisted the National Flag and took salute at the March Past.

The DC also highlighted the efforts and measures put in place by district administration to contain COVID-19 and complimented all the departments besides PRI’s, NGOs and volunteers for their efforts and proactive role from day one to contain the corona infection.

While highlighting the Developmental scenario of the district DDC said that   several work projects were completed in the district and those which are under execution will be completed as per the fixed timeline.

Later an award ceremony was also held and COVID warriors were felicitated for their exemplary work in covid-19 mitigation efforts.

Colorful cultural programmes were also presented which enthralled the audience.

Independence Day celebrations were also held at Sub-Division DH Pora. Similar functions were organized at all tehsil and block headquarters of the district.

Later NASHA MUKT BHARAT Campaign was launched and a vehicle was flagged off to generate awareness among masses to eliminate drug menace from district to make the district NASHA MUKT District.

On the occasion, DDC highlighted the achievements and developmental activities under-taken by various executing agencies besides implementation of centrally sponsored schemes.

He said the District Administration is on job to ensure that all the measures are put in place to meet the challenges arising due to covid-19.

The DDC said that during the lockdown period, facilities of online classes and community classes were provided to the students of the district to learn much more and get benefitted.

He said that the district Administration is taking every possible step to provide better healthcare facilities to the people at their door steps during lockdown.

The contingents of CRPF, J&K Police, Home Guard, Forest Protection, Fire Services and Emergency, Youth Services and Sports besides, students of various schools participated in the March past.

Cultural programmes were presented by the District Information Centre Shopian and students of various educational institutions.

Later a coffee-table book “SHAAN-E-SHOPIAN “was also presented & released by DDC Shopian on the occasion.

Prizes and certificates of appreciation were distributed among the Officers, Official’s and students for showing best performance in various activities.

Among others SSP, ADC, ACR, Civil and Police officers besides a large gathering of people were present on the occasion.

Addressing the gathering on the occasion, the DC highlighted the importance of the day and also paid rich tributes to the COVID warriors who worked tirelessly to fight the pandemic. He also presented a detailed report on the developmental front.

Deputy Commissioner said despite lockdown, the teaching learning process continued through digital medium and community classes and added that a competent resource group comprising Lecturers, Masters and Teachers have been involved to deliver tele-classes pre-recorded as well as live.

He said that despite the testing times, the district administration continued developmental works in the district while following all guidelines and SOPs.

Similar functions were also held at Sub-District Level at Sumbal and Gurez besides at Municipal Council and Committee offices and Tehsil Headquarters.

While congratulating the people of Ganderbal, DDC highlighted the various developmental achievements registered by district administration in different sectors in the district besides implementation of welfare schemes.

DDC said that 3 more Govt. Women colleges are coming up in the district at Ganderbal, Gund and Wakura for which land is already identified. Besides, Govt. Architecture College at Safapora is also approved which will be constructed at 100 kanals of land, he added.

To give a flip to the developmental activities in the district, the DDC said that under the Languishing project scheme, 73 projects are being approved to the tune of Rs 206.92 crore besides work on several other projects under different departments is also in full swing.

In his speech, the DDC also highlighted the initiatives taken by the District Administration in containment of COVID-19 infection in the district.

The function concluded with distribution of prizes among Covid Warriors and students who excelled in different fields.

Process for assembly polls to be started soon: LG Murmu