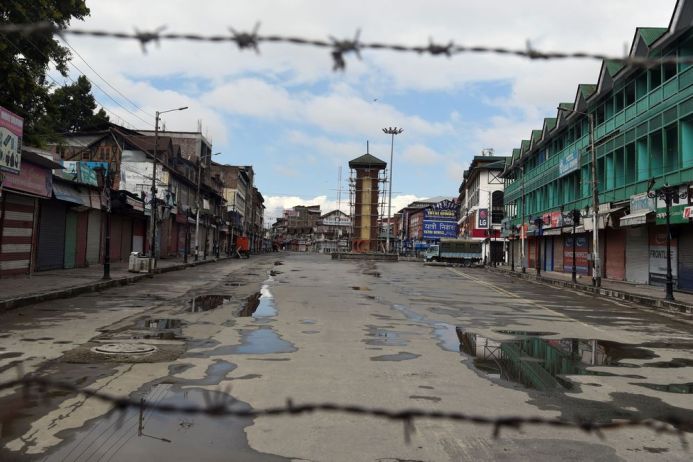 The Kashmiri community on Twitter is being silenced, one tweet at a time. On Thursday, 13 August, 19-year-old Iqra* found her Twitter feed to be unusually dull. The recent school passout, who often took jibes at the government or its high handedness in her tweets, instead saw starkly apolitical tweets or just silence on Twitter accounts that she had been following.

The abrupt silence was unexplained and Ms. Iqra instantly figured that “something wasn’t right.” She shared her observation with a close friend, who, it turned out, was summoned by the police. “She was called by the police, [and] she said that the police were intimidating her not to say anything ‘against the nation’.”

Her other friends told her that the Kashmir Police has cracked down on social media users who explicitly express their political opinions. “There are detentions,” she said, of the rumours floating among Kashmiri Twitter users. “Some people have been beaten up.”

A resident of central Kashmir’s Ganderbal district, Ms. Iqra felt intimidated. The air of intimidation online, she said, had scared her to the point that she had now restricted access to her tweets to the about 3,000 users who follow her on Twitter. She even deleted some recent tweets that she felt might offend the authorities. Simultaneously, at least thirty of her friends had deactivated their accounts. “Everybody is scared right now,” she said. “People who express themselves on Twitter have vanished.”

Nearly a dozen Twitter users in Kashmir, which The Kashmir Walla spoke with, said that they had felt intimidated after users they knew had been summoned by the police. At least two users — both college students in their 20s — said that the police have “intimidated” them. Users say some have been asked by the police to sign a bond, enforcing them to stay silent and not to tweet anything “anti-national”. However, fearing for their personal security, none of them agreed to talk further.

As Twitter space fell silent, many users, who were highly active, that The Kashmir Walla approached for an interview didn’t agree to talk out of fear of reprisal from the police.

Talking to The Kashmir Walla, Superintendent of Police, Tahir Ashraf, who heads Kashmir Police’s Cyber Police cell, said that some “Twitter users were threatened [by other anonymous users] to post a particular post, if not, they will be eliminated.” He added: “Otherwise, [they were told by the alleged anonymous accounts that they] have your pictures, [they] will morph your pictures and post it [online]. If you [the victims] won’t carry this particular tweet, you’ll be shamed and bullied.”

“The complainants are encouraged to come forward and report these issues,” said Mr. Ashraf. “The identity of the complainant will be protected, in no case it will be revealed.”

Mr. Ashraf didn’t specify the nature of tweets that he alleged were forced upon some social media users but denied that “bonds [have been made to sign] or arrests [have been made].” However, he asserted that the cyber police had received about fifty complaints that “some anonymous users are harassing and stalking and then threatening.”

The police, said Mr. Ashraf, is in the “process of identifying these users” — nearly seventy to eighty — “[and] because they do not carry their original names, we are calling them for questioning for whether they are involved and are using these handles.”

Mr. Ashraf, however, did not comment on whether the identification of users was being done with the help of Twitter. The Kashmir Walla reached out to Twitter via email asking if the company had shared any user data with the Jammu and Kashmir Police. This report will be updated as and when the company responds.

Meanwhile, as the current wave of scrutiny unfolds, social media users are already fearful of expressing opinions online and many have either deactivated their accounts or restricted their tweets to users who follow them on the platform. The word of mouth being spread among Kashmiri social media users warns of an ongoing crackdown by the police.

A friend had warned Ms. Iqra who, in-turn, warned her friends, and other Twitter users she regularly interacted with, against posting “resistance/anti-Indian tweets for a month. Cyber security… is on hunt [sic]”. ForMs. Iqra, the motives behind these moves are clear: “suppress our voices and take this platform of expression from us.” She wondered where else she could speak, if not on Twitter. “This is where we vent it out, all the frustration and pain that we experience in Kashmir,” she said of her Twitter account.

Amid the growing paranoia, Ms. Iqra thinks she won’t be able to tweet freely now. “In the near future, nobody is going to raise their voice. I think our stories will remain unheard. That’s what I feel about the whole thing,” she said. “It feels like we all are united by fear.”

A months long clampdown had ensued after New Delhi had revoked the limited autonomy of Jammu and Kashmir in August 2019, it imposed a communication blackout besides disallowing peaceful forms of protests in the region. With the lifting of the communication’s blackout and the outbreak of the coronavirus pandemic, the social media space had become the only avenue for Kashmiris to express their political opinions.

The Twitter space in Kashmir after the blackout, a cursory review suggests, has been dominated by political conversations, largely around the long-term implications of the unilateral annulment of the Muslim-majority region’s limited autonomy. One of the Twitter users that The Kashmir Walla spoke with, said that social media users “are being framed wrongly” and that many suspected the police of “planning” the crackdown in advance and “taking cover behind” allegations of harassment “to crackdown on free speech.”

Silencing dissent, however, isn’t new–at least to Kashmir. An investigation published in October 2019 by the Committee to Protect Journalists (CPJ), an independent nonprofit that promotes press freedom worldwide, found that “hundreds of thousands of tweets blocked in India since August 2017 under [Twitter’s] country withheld content policy were shared by accounts that focus on Kashmir.” Dozens more tweets were withheld, complying to official requests by the Government of India. After fifty-three official requests by the government, the vast majority of the withheld accounts were from the group that referenced Kashmir, hosting over 9,20,000 tweets between them, CPJ had found. In fact, in the second half of 2018, more accounts were withheld in India than in the rest of the world combined.

The scrutiny also isn’t limited just to Twitter. Tech-giants are often found to be siding with the governments across the world — suppressing free speech and censoring anti-government content. The New York Times in 2018 reported that Facebook’s internal guidance asks moderators to “look out for” the phrase “Free Kashmir” — that the newspaper reported as “completely legal” — and apply extra scrutiny on those accounts.

For a Srinagar-based 25-year-old user, who requested anonymity, said Twitter was one of the avenues where she could express herself after the August 2019 clampdown. But now, she said, it has been difficult as she has lost the sense of security. Out of fear, she deactivated her Twitter account on Thursday. “Social media is a free and safe space to express oneself, share thoughts, participate in discussions and trends, and it should remain so,” she said.

The 28-year-old Saahil*, a businessman in Srinagar, saw this “crackdown” coming; he believes that Kashmiris have a tendency to see the worst aspects of things, and it has never failed him. He has restricted access to nearly 22,000 tweets to his about 2,000 followers on Twitter.

For Mr. Saahil, these tactics to spread fear among Twitter users fall in line with the motive of the August 2019’s communication blackout: “It is to hide their suppression and illegal policies. They have to control the information narrative coming out of the ground-zero, so this crackdown was anticipated.”

“Articles [of the constitution] about freedom of expression are only confined to papers… on the ground, their actions speak louder than their laws and articles,” said Mr. Saahil. His fears arise from the fact, he said, that the Government of India even detained and booked unionist leaders, “who carried the flag of India.”

Mr. Saahil had joined Twitter to criticize the policies of the government and find a vent to his angst; however, after the alleged clampdown, he said, Twitter isn’t the same. “What we have now is anarchism and authoritarianism,” he said of the crackdown but still maintained that “it is important to let the world know about how India is grabbing our land, intending to change the demographics.”

(Names have been changed as per request)

“NC has no moral authority to lecture anybody over protection of Article 370/35-A” : Dr Beg