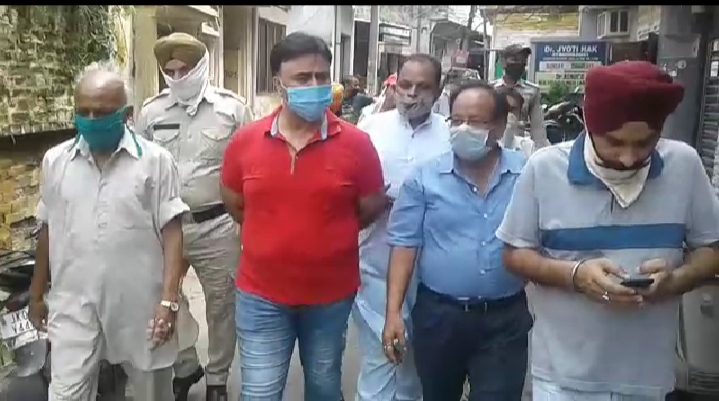 In a statement to the press, Malhotra conducted a tour of ward number 8 in Old Rehari area and met people during which the people complained that contaminated drinking water was being supplied to them and flash flood in the locality due to incomplete protection wall along nallah adjusted to the ward.

The tour was organised by Tariq Nar to the said ward number during which the people informed Vikram Malhotra that they were facing shortage of drinking water supply.

“The people apprised that the water being supplied in the locality is contaminated. The water supply is also not regular. There is fear of water borne diseases among the people because of the impure water supply,” the people alleged during interaction with the JKAP senior leader.

The locals also demanded that the protection work along the nallah. “The locality faces flash floods during rains. The flash flood triggered by the heavy rains caused havoc in the locality and people are being forced to live miserable lives,” said the locals.

The people have demanded fresh and clean drinking water supply-line from the Tube Well and construction of toilet complex in the locality.

On hearing their grievances, the JKAP senior leader Vikram Malhotra expressed serious concern over the supply of contaminated water in ward number 8 of Old Rehari.

“It is very unfortunate that a locality within the Municipal limits of Jammu City is not being supplied clean drinking water. In these circumstances, the people are being compelled to buy water or bring it from another area,” said Malhotra.

Expressing surprise, Malhotra said “Are we living in Jammu City? How can the Jal Shakti Department turn blind eyes towards the people living within the City?

He appealed to the concerned department to send a team of officials from the Jal Shakti Department to remove the leakages in the water supply lines and provide clean drinking water.

“On the one hand, we are fighting against covid-19 to stop its spread, and on the other, people are being discriminated against in one of the localities in the City. The discrimination with the people will not be tolerated at any cost,” he said.

Malhotra said that “The people are worried about the health of their families in Old Rehari because of adulterated water supply.”

The Department, he said, must act swiftly and fix responsibility on the officials for their failure to provide clean drinking water to the people. The department should not discriminate against the people,” said Malhotra.

Earlier, he assured the people that their concerns will be highlighted before the concerned department for redressal of the issues.

Armies of India, Pak exchange fire along LoC in Poonch

Two held with pistols in Jammu