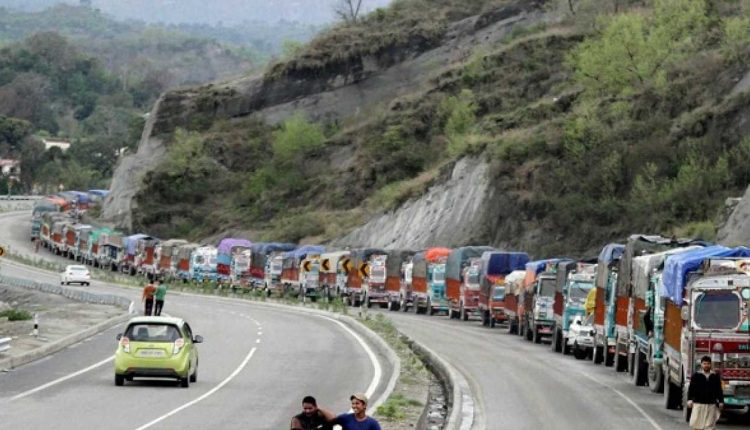 Srinagar, Aug 20 (KINS): The Jammu and Srinagar National Highway on Thursday was closed for traffic following multiple landslides on the Ramban-Banihal stretch in Ramban district due to heavy rainfall.

“Though the efforts were on to start clearance work, it could not undertake fully as it was raining heavily in the area,” he said.
According to the officials several vehicles were stranded at different places due to blockades.

Last week, the highway was closed for two days due to a massive landslide triggered by heavy rains in the Mehar area of Ramban district.

Pertinently, the National Highway Authority of India (NHAI), which has been executing the four-laning project, has submitted a detailed project report (DPR) worth Rs 2,000 crore to the Centre for re-alignment of 14-km four-laning road stretch on the treacherous Ramban-Banihal section to bypass half-a-dozen “killer spots” to make it all-weather road.

The re-alignment of the road has been finalized between village Marog and Makarkote in Ramban district. All major trouble and land-sliding points including Marog, Panthial, Digdol and Battery Chashma would be bypassed after realignment to make it all-weather road.

The project cost of Udhampur-Ramban stretch is Rs 1,710 crore while it is Rs 2168.66 crore for Ramban-Banihal stretch.(KINS)

LG Manoj Sinha to take review of all Deptts, HODs asked to remain present in Sgr