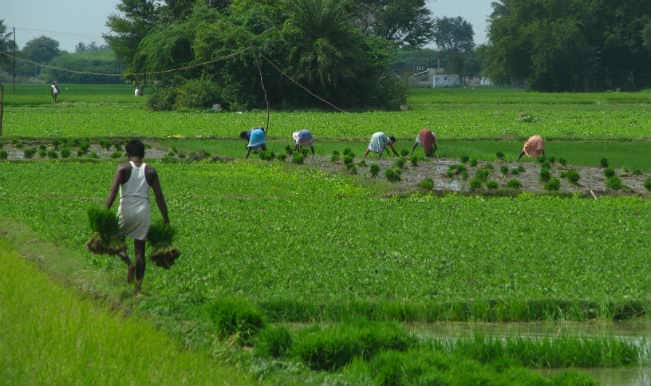 SRINAGAR, August 21(KINS): The farmers are worried as rainfall deficit and scab infection have damaged crops in Kashmir.

Kashmir produces over 18 lakh metric tones of apples every year.

Farmers however said they fear over 50 percent damage to apples due to dry weather and scab disease.

“The scab infection has damaged our apple. We fear heavy losses to apples this season. Kashmir produces 22 crore boxes of apples annually. But this season there will be a huge decrease in production due to rainfall deficit and scab infection,” Bashir told news agency Kashmir Indepth News Service (KINS). “Reason for scab infection is substandard pesticides. There is no check on pesticides by the authorities,” he added.

Kashmir has two harvesting seasons for apples, one is April-May and another from ending September to November.

Abdul Majeed Wani, a Saffron grower from Pampore said the Saffron fields have turned dry due to rainfall deficit.

“We are not able to dig our fields. The production of Saffron will depend upon the weather conditions in the next few weeks. If the dry continues, then there will be heavy damage to Saffron production. I can only pray that there is sufficient rainfall,” Wani said, who is also President of the Saffron Growers Association.

The harvest season of Saffron begins from ending October. More than 16,000 families are associated with this crop production in the valley.

Kashmiri saffron is of superior quality because of the higher concentration of crocin, a carotenoid pigment that gives saffron its colour and medicinal value.

Saffron is cultivated in three districts: Pulwama, Srinagar and Budgam of the valley.

Pampore, the township in Pulwama district produces the most.

Kashmir has recorded the highest temperature of over 36 degrees celcius in August, the first time in 40 years, which is believed to be due to global warming.

As per the Meteorological Department, in the last two months, Valley received deficit rainfall to the tune of 50 percent.

An official of Agriculture Department said if dry weather continues for the next few weeks, there will be huge damage to crops.(KINS)