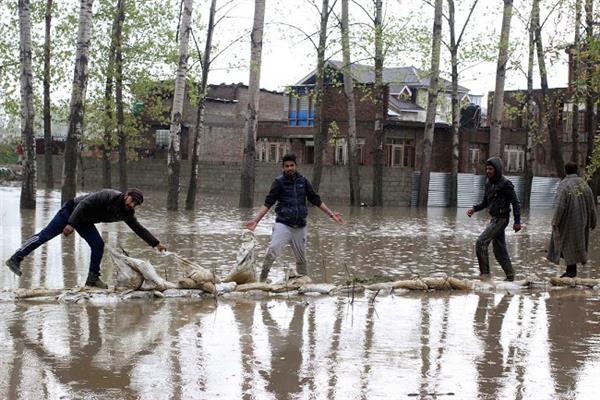 Srinagar, Aug 27 (KINS): Chief Engineer, Irrigation, Flood and Control, Kashmir, Iftikhar Ahmed Kakroo Thursday said that there is no threat of flood as of now and that the water level in Jehlum is below the danger mark.

“We are monitoring the situation and as of now there is no threat of flood. The water level at Sangam which was at 7.50ft in the morning was receding,” Kakroo told news agency Kashmir Indepth News Service (KINS).

He added that the Administration is fully alert to deal with any eventuality. “There is no need for any panic as the weather condition is likely to improve from today evening,” he said.

Reports said water in Jehlem, other streams, nallahs and flood channels in many areas of south and north Kashmir and some parts of Srinagar city were increasing.

Moderate to heavy rainfall lashed Kashmir since Tuesday night, bringing down the temperatures and ending the four-month dry spell in the Valley while triggering landslides and shooting stones along the Srinagar-Jammu highway for the second consecutive day.

“Moderate rains along with thunder in Jammu Kashmir will continue till Thursday with heavy rains at a few places,” he said.

Meanwhile, a weather advisory issued by the Meteorological department has predicted flash floods and landslides in vulnerable parts.
“IMDs experimental model shows that the soil at various places of J&K, especially Jammu region is fully saturated and has low water absorbing capacity,” it said.

As per the advisory issued by Disaster Management department, continuous rain may lead to flash floods at vulnerable places.
However, rain also brought relief to the farmers and apple growers in the Valley that was reeling under dry weather conditions for the past four months.

After the September 2014 deluge, Kashmir is witnessing irregular weather patterns with even short periods of rainfall creating a flood-like situation.

The saturated water table, encroachment of water bodies, conversion of marshy land for residential constructions and shrinking Jhelum and its flood spill channel has added to flood threat in Kashmir.(KINS)