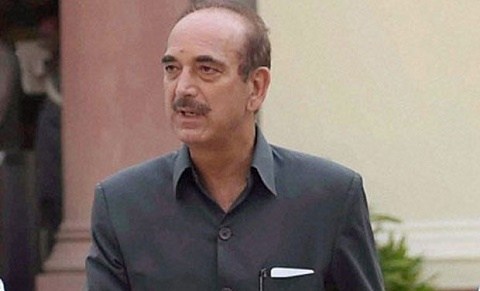 SRINAGAR, August 29(PTI): Congress leader in Uttar Pradesh has said the party should expel Ghulam Nabi Azad, who was among the 23 signatories to a letter that called for an overhaul of the organisation.

The 23 Congress leaders wrote to party chief Sonia Gandhi, seeking an active and full-time leadership of the grand old party among other organisational changes.

“At the Congress Working Committee (CWC) meeting, party chief Sonia Gandhi said she was hurt by the letter but now the issue is over. Even after that, he (Azad) spoke to the media and posted about it on Facebook the next day,” Naseeb Pathan, who was a party MLC between 2004 and 2016, told PTI-Bhasha on Friday.

“As he has broken the party’s discipline, he should be made ‘azad’ (free) and expelled from the party,” he said.

Pathan also released a video on social media over the matter.

“You know you (Azad) got 320 votes in the Assembly when you contested for the first time. After that, you went everywhere as nominated. It is not appropriate to say such things about the party,” he said.

When contacted, Congress’s media coordinator in Uttar Pradesh Lalan Kumar said, “I am aware of this statement but I am not well.”

This is not the first time that Pathan has come out with a statement against Azad.

After the 2017 Uttar Pradesh Assembly polls, he had said Azad, who was the AICC in-charge of the state at that time, should take responsibility for the party’s poor show in the election and resign.