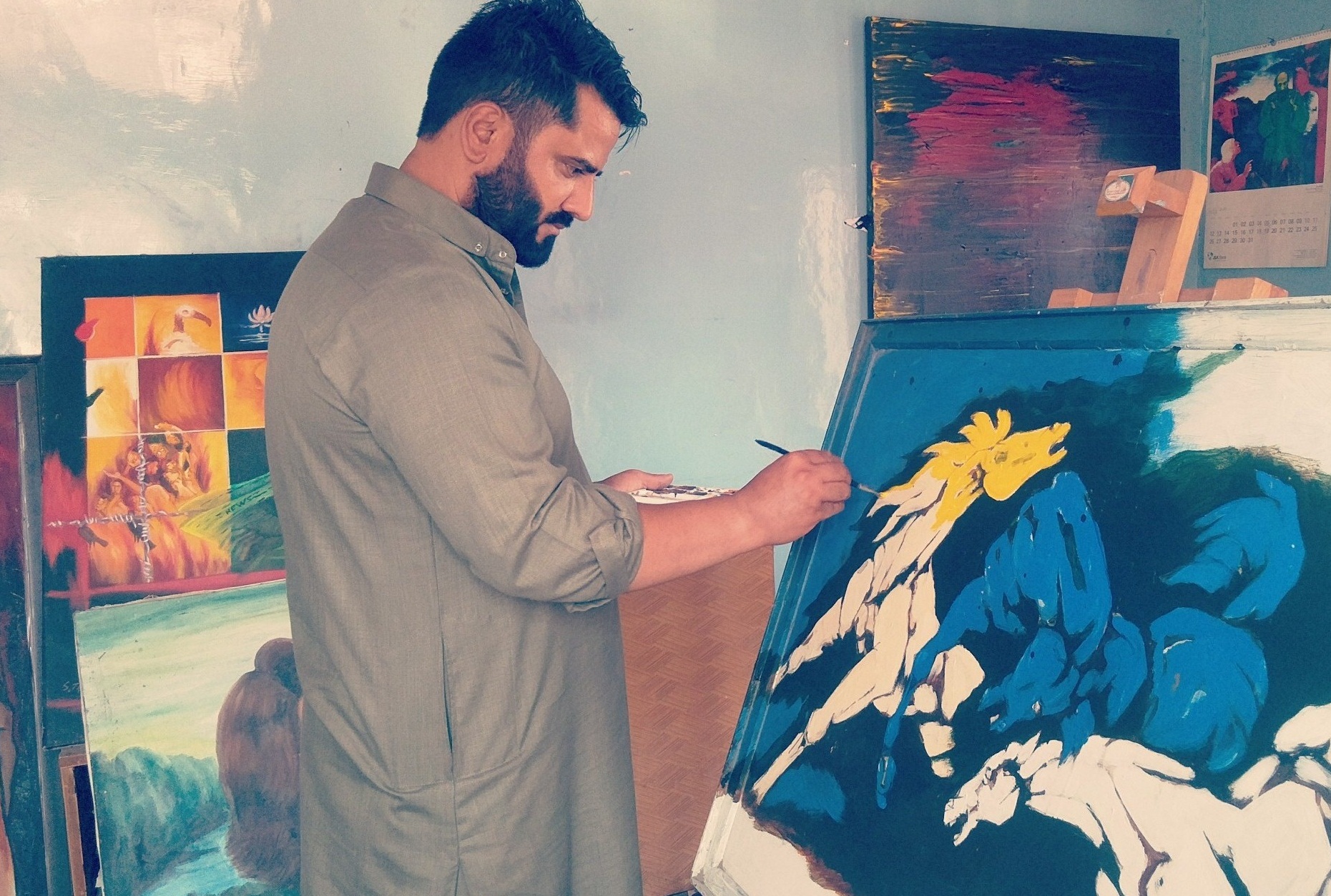 Srinagar, August 31 (KINS): Sheikh Zameer, a 39-year-old man was just five when he started learning painting from his father Abdul Hameed Sheikh. Since then he has been showcasing sufferings of Kashmiris through colours.

Hailing from North Kashmir’s Old Town Baramulla, Sheikh is running an advertising agency but painting has become a passion for his life.

“I want to portray the sufferings of people of my region through paintings. I have made paintings on everyone’s sufferings-Muslims, Kashmiri Pandits or Sikhs. I want our future generation to know what Kashmiris have gone through over these years,” he told news agency Kashmir Indepth News Service (KINS).

In one of his paintings, he shows when Kashmiri Pandits were killed in early 1990s, Kashmiri Muslims were shouldering their dead bodies.
Similarly, in another painting, he shows a Shikara Wala sitting on the banks of Dal Lake.

He is waiting for tourists from sunrise to sunset then returns home disappointed as there are no tourists to take around.

“Our tourism sector has been badly hit whenever there is a shutdown or curfew.  In this painting I want to tell how poor Shikara Walas are waiting for tourists so they could make their earnings,” Sheikh said.

In another painting, he shows a Kashmiri is carrying his son on his shoulders. The father wants to take his son forward but does not know his future because of turmoil in Kashmir. This painting shows the bleak future of Kashmiri boys because of the violence. The boy instead looks backwards at the blood around.

Sheikh has been selling his paintings across the world in exhibitions. “Besides showing the sufferings of Kashmiris, I also make good money by selling these paintings.”

Recently, he conducted an open painting exhibition in Baramulla with the motive to help youngsters to overcome the lockdown-induced depression.

Similarly, he also shows how the environment is being degraded in the valley. In one of his paintings, he shows, some people were cutting down the forests.

“I am a self-taught artist. Whatever I learnt only through my father in my school days,” he said.
He was just 11 when he lost his father, Abdul Hameed Sheikh, who was also an artist from Baramulla. He was killed by crossfire in July, 1992, while on his way home near the banks of the Jhelum.

“I want to continue this art till my last breath,” he says. Among his two brothers, one is a doctor and another engineer. “One of my brothers does painting but only I am passionate about this,” he added.(KINS)