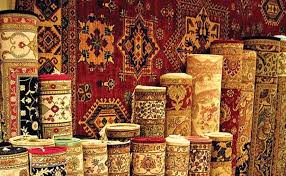 Srinagar, Sep 11 (KINS): At least 3 lakh people associated with handicrafts in Kashmir are struggling to feed their families due to subsequent lockdowns since August 5 last year.

Kashmir remained shut for months after abrogation of Article 370 in August last year and now COVID-19 has complicated the problem.
Amid this, at least 3 lakh people associated with handicrafts including carpets, papier-machie, shawls, wood carving are finding it difficult to feed their families. Kashmir’s handicrafts are famous across the world due to quality and are man-made.

Ghulam Mohammad, 45, a resident of North Kashmir’s Baramulla district has been selling vegetables on a footpath for the last two months.
“All the money I had saved which I earned through carpet weaving has been exhausted. It is over a year now, we are making no earnings,” he told news agency Kashmir Indepth News Service (KINS). Before August 5 last year, he would earn Rs 600 per day. He had two more people who were assisting him in carpet weaving.

There are so many artisans who have taken up odd jobs to manage the expenses of their families during the lockdown.

“We were making earnings even during the worst times. But this time, our business is shut as we are not able to export carpets in international markets,” said Bashir Ahmad, a carpet dealer.

Gulf and European countries form a major customer base for Kashmiri carpet dealers.
They have suffered huge losses as they could not export the goods.
Mohammad Subhan, a papier-machie artist from Srinagar has been sitting idle since the COVID-19 began in March.

“We have been badly hit first by lockdown post abrogation of Article 370 and now COVID-19 pandemic. There is no availability of raw material,” he added.

The Kashmiri craft of papier-machie mainly uses wood, leftover wood pulp and paper waste.
Every year Subhan would participate in various artisan fairs across India like in Delhi, Mumbai, Pune and Gujarat.
However, this year, these fairs were not organized due to COVID-19.

“We are neither able to export goods in the international market nor there is any domestic market. All the orders made earlier this year have been cancelled,” Bhat said.
President Kashmir Chamber of Commerce and Industries (KCCI), Sheikh Ashiq said the Kashmir economy has suffered losses over Rs 40,000 crore for the last one year.

“Every sector be it tourism, handicrafts, transport, traders, IT has been badly hit for the last one year. Five lakh people have become jobless in the last one year,” Ashiq said.
KCCI is an umbrella body of business organizations in Kashmir.

KCCI has also raised the issue with Union Finance Minister Nirmala Sitharaman and sought special packages in every sector which suffered heavy losses for the last one year.
An official from the Department of Handicrafts said the coronavirus pandemic has impacted all forms of trade globally. (KINS)

Movement of fruit, vegetable, sacrificial animals to be facilitated by Traffic Police on priority: Div Com