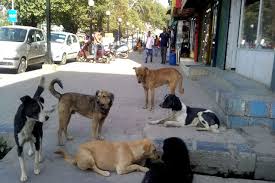 Reports adding that the canines have spread reign of terror among the residents especially old aged persons and children in the area.

However, all the injured were taken to nearby hospital for treatment, reports said.

Meanwhile Hospital authorities also confirmed the incident to KINS and said all are said to be stable. They identified all Injured as Arfat son of Fayaz Ahmad , Khushboo daughter of Fayaz Ahmed , Posha wife of Fayaz Ahmad and Haseena wife of Mushtaq Ahmad.