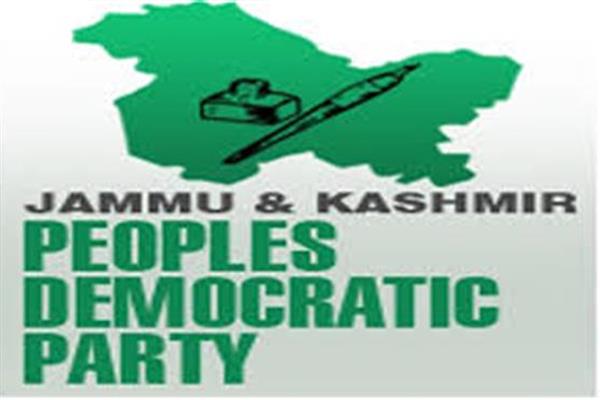 Srinagar, Sept 16 : Peoples Democratic Party (PDP) on Wednesday termed the killing of a 23-year old youth in north Kashmir’s Sopore as a “cold blooded murder” and said this excruciating episode has once again served as a grim reminder of how truth is mangled and stories are fabricated to justify killing innocent civilians in Jammu and Kashmir.

In a statement issued PDP spokesman said that in order to justify its repressive, unconstitutional, inhuman and extremely violent measures upon the people of Kashmir, all the government of India needs is a militancy narrative. He added that armed forces in Kashmir have been given absolute impunity to detain, torture or kill innocent people and that is how the cold-blooded murder of 23 year old Irfan Ahmed Dar, a shopkeeper by profession wrongfully accused of being an OGW, has occurred.

Spokesman added that the wounds inflicted upon the families of those Kashmiri’s who recently were killed by the forces of Shopian were still fresh and the government has perpetuated yet another act of terror upon an innocent civilian of Kashmir.

He said that a probe ordered into the Shopian fake encounter by the government is acting as mere eyewash, as delay tactics are being adopted in conduction of a thorough investigation.

According to the PDP spokesman, guns and bullets have become the only symbols of Indian control in Kashmir and it is time that the saner voices in the country come forward and act responsibly in putting lid to collective punishment given to the people of Jammu and Kashmir without any remorse.

Forces launch CASO in many areas of Shopian