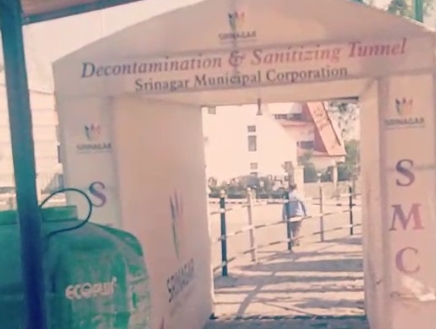 The Srinagar Municipal Corporation had installed decontamination and sanitation tunnels in various hospitals and departments including civil secretariat Srinagar in a bid to contain the spread of the coronavirus pandemic.
Four sanitation tunnels have been installed at Civil Secretariat Srinagar, which is the highest seat of governance. Surprisingly, none of them is operational.

“If this is the condition of the Civil Secretariat where Lieutenant Governor, Advisors, Chief Secretary and other bureaucrats visit daily then you can expect conditions at other places,” an official at Civil Secretariat told news agency Kashmir Indepth News Service (KINS).

On Thursday the KINS also managed to click videos which show none of the sanitation tunnels were operational at the Civil Secretariat.
“You should ask this question to SMC why the sanitation tunnel is not functional. They might have better knowledge,” a security officer told KINS.

When contacted Commissioner Srinagar Municipal Corporation Gaznazfar Ali, he said that the disinfectant was not available. “We have placed the order and are expecting it by tomorrow. We’ll make it functional again,” he told KINS.

The tunnel disinfects people by spraying chemicals on every person who goes through it. These types of tunnels have been used in China and Turkey.

At the time of installation of sanitation tunnels with much fanfare, Commissioner SMC, Gazanfar Ali had said the Corporation has also installed two decontamination tunnels at the entry point of secretariat to ensure visiting persons get sanitized instantly while entering or leaving the secretariat premises. Even former Mayor SMC was carrying a team of cameramen with him while installing tunnels to give wide publicity.

The condition of tunnels is the same in other government offices. Like Sanatghar at Bemina which houses several departments and corporations, the tunnel is defunct.

The SMC is already in the news for wrong reasons in the recent past. Recently, Anti-Corruption Bureau (ACB) carried out raids at residences of Srinagar Municipal Corporation (SMC) officials in Srinagar about illegal construction of shopping Plaza.

The anti-graft body said that they raided houses of four top officials of SMC and incriminating material, documents were recovered during the searches.

“The searches were conducted in residential houses of accused persons,” it said.
The statement said that a joint surprise check was conducted by ACB Police Station Srinagar to probe into the allegations of illegal construction of Shopping Plaza.

If voted to power in majority, will grant regional autonomy in 30 days: Farooq Abdullah