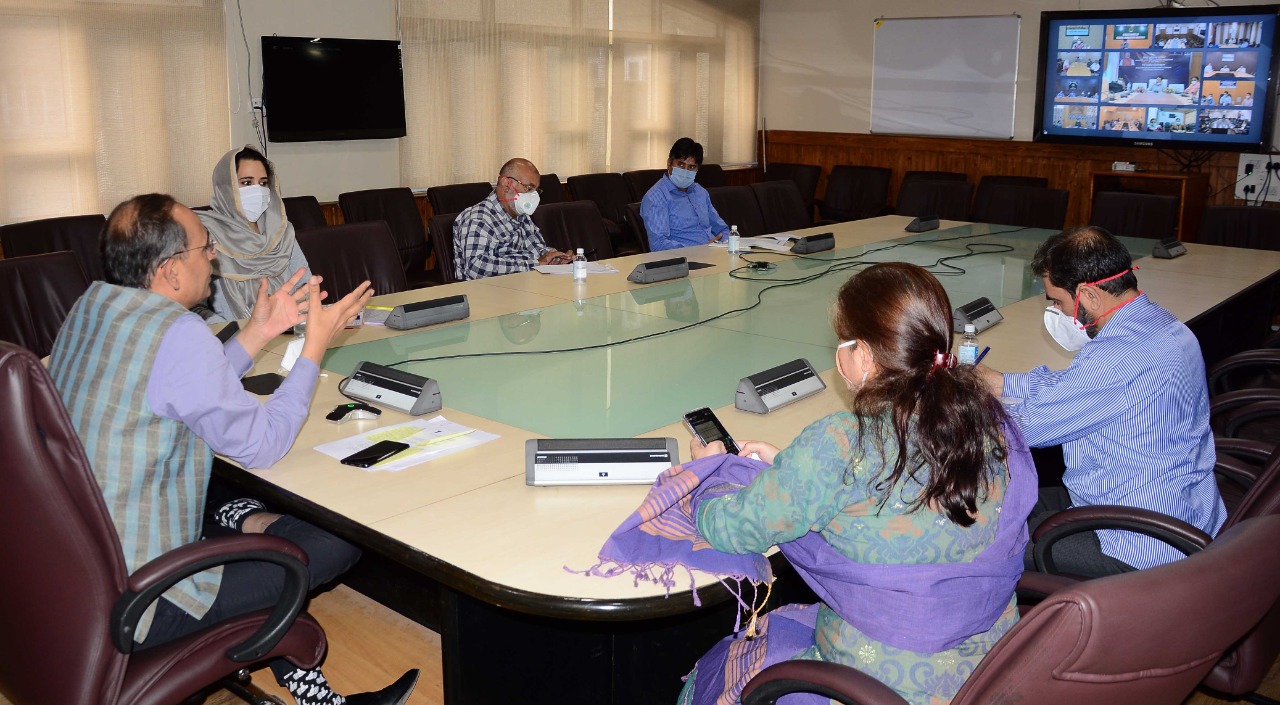 SRINAGAR, SEPTEMBER 24: Principal Secretary Power Development & Information, departments, Rohit Kansal today reviewed the arrangements regarding the flagship “Back to Village-3 (B2V3) programme starting from 2nd October to 12th October, 2019 at Civil Secretariat here.
Commissioner Secretary GAD, Manoj Kumar Dwivedi, Secretary Rural Development and Panchayati Raj, Sheetal Nanda, Secretary Planning, Development, Monitoring and Disaster Management Departments, Simrandeep Singh, Director Information and Public Relations, Dr. Syed Sehrish Asgar was also present during the meeting while all the Deputy Commissioners of Kashmir, Jammu Divisions, Chief Engineers of PDD, Jal Shakti of both divisions participated in the meeting through video conferencing.
While chairing the meeting, the Principal Secretary stressed upon the DCs that the fundamental objective of B2V3 programme should be action oriented approach on all the works that have been allotted or started during the previous two Back to Villages programmes.
He impressed upon the Deputy Commissioners that the plan for works to be carried out in this phase of B2V should be prepared well in advance besides arrangements for holding Gram Sabhas, Ward Sabhas, Bal Sabhas and Mahila Sabhas should be done earliest and the public should be made aware about these programmes beforehand.
Kansal instructed the DCs that proper mechanism should be developed regarding segregation of grievances received during the B2V3. He added that the public should also be intimated about the status of these grievances in a proper time frame.
Highlighting the need of departmental coordination during the programme, the Principal Secretary maintained that B2V is entirely an inter departmental effort. He directed the DCs to ensure that all departments are represented during the B2V3 programme besides specified counters of all departments should be established in each visiting block highlighting different beneficiary schemes and other programmes for the general public.
Terming this phase of B2V village has unique affair, Rohit Kansal informed the meeting that during B2V3 Safai Abhiyan in all Panchayats should be carried out with other activities like mega Gram Sabha and sports programmes. He asked the DCs that people should be encouraged about using dustbins and biodegradable materials so as to maintain cleanliness in their surroundings. He directed them to hold awareness camps in each panchayats for the same besides other mediums should also be used to maximize the reach of the information disseminated.
Kansal impressed upon the DCs that they should establish Control Rooms for B2V3 programme in their respective districts and directed them that they should hold a meet with visiting officers of Panchayats before and after B2V3 programme.
The Principal Secretary, impressed upon the DCs that all the arrangements regarding B2V3 should be made on priority and directed them that all the visiting officers should be given a list of activities to be carried out in their respective visiting blocks.
He further instructed the DCs that the visiting officers should be provided with information regarding languishing projects, major developmental plans and schemes carried in the district, besides action taken report on all the works carried out during B2V1 and B2V2 should also be given to each visiting officer. He directed them that a detailed meeting with all the line officers in their districts should be held before the actual start of B2V3.
Speaking during the meeting, Commissioner Secretary GAD, Manoj Kumar Dwivedi stressed upon the officers that they should develop an appropriate training schedule for all the visiting officers of the Panchayats as this phase of B2V is much larger than the earlier phases.
Secretary Rural Development and Panchayati Raj, Sheetal Nanda informed the meeting that the preparations for training have been finalized and master training programme for master trainers will start from tomorrow who in turn will impart turn to visiting officers in their respective districts.
She further informed the meeting that the material regarding B2V3 is ready and directed the DCs that they should collect the same material from offices of Directorates of Rural Development of their respective divisions.
Meanwhile, during the course of meeting, Rohit Kansal also reviewed the progress of ongoing Jan Abhiyan and maintained that this unique programme has been received well on the ground by the public and has transformed the developmental scenario of entire Jammu and Kashmir.
Highlighting on the successful implementation of Jan Abhiyan and previous two phases of B2V, Rohit Kansal informed the meeting that these unique missions of reaching out to the public at their doorsteps will be institutionalized and are going to be regular affairs as they will help in formulation of district plans according to Panchayats.
The Principal Secretary impressed upon the Deputy Commissioners that the upcoming Block Diwas on 30th September will be the main activity before the actual start of B2V3. He directed them to ensure that reports on all the developmental works going on in their respective districts is submitted before the final Block Diwas day.
Complimenting the Deputy Commissioners for successful implementation of Jan Abhiyan, Rohit Kansal maintained that this revolutionary programme of equitable development has brought governance to the doorsteps of the general public.