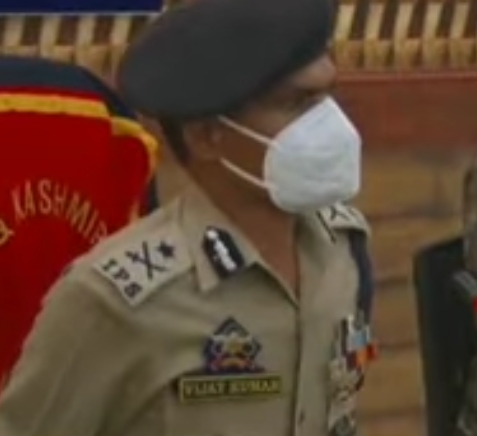 Addressing a presser at Police Control Room (PCR) Srinagar, IGP Kashmir said two top militant commanders of Lashkar-e-Toiba (LeT) have been killed in Sirhama area of south Kashmir’s Anantnag district where joint forces laid a cordon after receiving credible inputs about the presence of militants in the area.
Kumar said one of the slain militant killed in the gunfight was identified as Abu Rehan, a native of Pakistan, who was active since March 2019 while another slain was identified as Adil Bhat, also a LeT commander. He said Adil was involved in the attack on two policemen in Nowgam area of Srinagar district on August 14.
About Advocate Babar Qadri’s killing, IGP said that incident happened at 06:20 pm on Thursday, when two masked men entered into his Hawal, Srinagar residence as clients with files in their hands. “As per reports, they told Qadri that they had to discuss some accident related case with him but instantly fired at his head with pistols from point blank range in which Qadri sustained four bullet wounds in his head and succumbed on way to SKIMS”, IGP told reporters.
He added the assailants after the attack, fled from the spot and during the course of time they fired few bullets in the air also.
IGP informed that Police have constituted a Special Investigation Team (SIT) headed by SP Hazratbal that will probe all the aspects into the killing of Qadri.
On the assassination of Block Development Chairman Khag, Bhupinder Singh’s killing, IGP said Singh had left his two PSO’s for relax before heading towards his home however militants took advantage of the situation and killed him outside his residence. He said, “Militants were probably knowing about his movement and they shot him dead outside his residence. However we have taken strong cognizance of the incident and have suspended two PSOs”.
He added that initial probe suggested that two LeT militants are involved into it namely Yousuf Kandroo and Abrar Ahmad. Regarding the killing of a CRPF personnel at Wadipora area of central Kashmir’s Budgam district, IGP said the attack was carried out by Jaish-e-Muhammad outfit as cartridges of M4 was found at the site of incident. “M4 is usually carried by JeM militants”, IGP further added.

When asked the number of active militants in valley, the IGP said that around 170 to 200 militants are active in Kashmir of which 40 are foreigners whom police knows by name. (KINS)